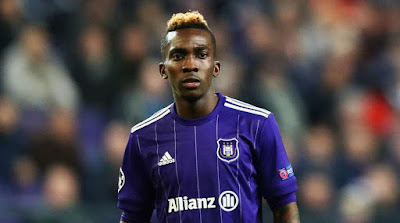 Onyekwuru joined the Toffees ahead of the 2017-18 season, but was immediately loaned out to Anderlecht.

He scored nine goals in 19 appearances for the Belgian side before a knee injury in January cut his campaign short. Galatasaray said on Twitter on Monday that formal negotiations have started with the Goodison Park outfit to take Onyekuru to Turkey, on what is thought to be an initial loan deal.

Onyekuru was called up for the Super Eagles camp in May 2017.He made his senior debut for Nigeria in a 3–0 friendly win over Togo on 1 June 2017.

The 21 year old known to be very pacy on a good day, began his football career with the Aspire Academy in 2010, and graduated in 2015 joining their partner club, K.A.S. Eupen. He made his debut for Eupen on 5 September 2015 in a 2–2 tie against K.F.C. Dessel Sport in the Belgian Second Division, and helped the team get promoted to the Belgian First

Division A in his debut season,before making  his professional debut in a 3–0 loss on 30 July 2016 against S.V. Zulte Waregem.After a successful season in the Belgium first division, Onyekuru finished as one of the top scorers in the league, catching the attention of various larger teams in Europe.

He finished the 2016–17 season as joint top-scorer with 22 goals, but the trophy was handed to Łukasz Teodorczyk as he scored more away goals than Onyekwuru who was nonetheless given accolades for contributing immensely to the team’s dream achievement.