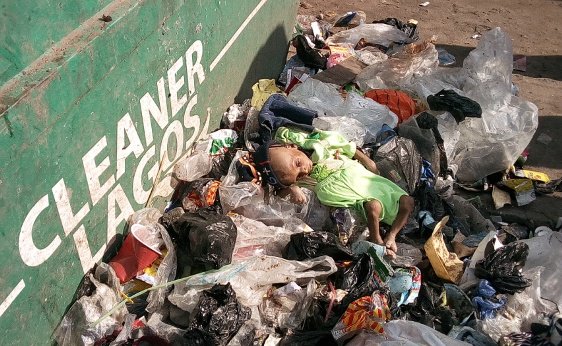 The corpse of a baby girl dump at refuse site on Apapa Road, Ebute Metta, Lagos, on  Thursday morning

Emotions rose on Thursday as passers-by cursed an unknown mother, who dumped the corpse of her baby at a heap of refuse in Lagos.

NAN-TV reports that the corpse of the baby girl was discovered at the dump site at Costain Bus-stop on Apapa Road in Ebute Meta, Lagos State.

The baby, clad in a light-green unisex wear with a black cap, looked malnourished.

A trader, Adeolu Aderogba, said she resumed her routine around 7.00 a.m. only to discover that the baby was at the refuse dump.

“Whoever dumped the baby there must be a very wicked person.

“Babies are precious gifts from God and should be cared for but some contemporary mothers seem to be careless and morally bankrupt,’’ she said.

A resident who pleaded anonymity, told NAN-TV that the baby showed signs of life in the early hours of the day.

“Imagine this kind of tragedy, if the baby had been rescued on time, she would not have died,” he said.

The Police Public Relations Officer in Lagos State, CSP Chike Oti, confirmed the incident and said that the Iponri Police Division had been notified about the baby’s corpse.

Oti told NAN that the police were taking action but that no arrest had been made in connection with the matter. (NAN)