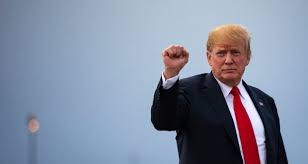 Mr. Trump, in an all-caps message on Twitter addressed to President Hassan Rouhani of Iran, wrote that the country would face “CONSEQUENCES THE LIKES OF WHICH FEW THROUGHOUT HISTORY HAVE EVER SUFFERED” if he continued to threaten the United States.

To Iranian President Rouhani: NEVER, EVER THREATEN THE UNITED STATES AGAIN OR YOU WILL SUFFER CONSEQUENCES THE LIKES OF WHICH FEW THROUGHOUT HISTORY HAVE EVER SUFFERED BEFORE. WE ARE NO LONGER A COUNTRY THAT WILL STAND FOR YOUR DEMENTED WORDS OF VIOLENCE & DEATH. BE CAUTIOUS!

Mr. Trump’s message was apparently in response to a speech Sunday by Mr. Rouhani, who said that any conflict with Iran would be the “mother of all wars.”

Mr. Rouhani had earlier threatened the possible disruption of regional oil shipments if its own exports were blocked by United States sanctions.

Five months ago, Jared Kushner, President Trump’s son-in-law and senior adviser, began quietly shifting his focus from brokering a peace accord between Israel and the Palestinians to tackling the dire humanitarian crisis in the Palestinian enclave of Gaza.

Now, with Israel and the Hamas militants who control Gaza in a fresh cycle of violence that analysts fear could escalate into a full-blown war, Mr. Kushner and his partner in Middle East peacemaking, Jason D. Greenblatt, are threatening to pull the plug on Plan B.

Declaring that no foreign investors are willing to pour money into Gaza during what they label a Hamas-driven conflict, Mr. Kushner and Mr. Greenblatt, the president’s special representative for international negotiations, are rethinking their efforts to rebuild Gaza’s economy as a way of opening the door to a broader peace accord.

“Hamas has driven Gaza to a state of desperation,” Mr. Kushner said on Sunday. “Provocations will not be rewarded with aid.”

Hamas leaders, he said, needed to demonstrate “a clear intent for a peaceful relationship with their neighbors” in order for aid and investment money to flow.

The Trump officials laid the blame for the violence on the Hamas leaders, whom they condemned as “corrupt and hateful” and accused of attacking Israel relentlessly over the past few months with “rockets, mortars, terror tunnels, kite bombs and other weapons of aggression.” Palestinians say Israel set the tragedy in motion by imposing a blockade on Gaza intended to turn the people against their leaders.

The clashes threatened to erupt into a wider conflict on Friday when Israeli warplanes struck targets across the Gaza Strip after a Palestinian sniper killed an Israeli soldier along a border fence. Both sides are now honoring a cease-fire, and Israel said on Sunday that it would reopen Gaza’s main commercial crossing if the truce holds for another two days.

Still, the talk of a new Gaza war is another setback for Mr. Kushner and Mr. Greenblatt, two diplomatic newcomers whom Mr. Trump charged with negotiating what he has called the “deal of the century.” After nearly 18 months of work, and more than a dozen trips to the Middle East, the timing for the rollout of their peace plan remains uncertain.

“We have the plan ready — mostly ready — and when the time is right, we’ll bring it out,” Mr. Kushner said in an interview before the latest spike in tensions. .

Their effort has been stymied by the Palestinian refusal to talk to them since Mr. Trump recognized Jerusalem as the capital of Israel in December. Arab diplomats say their leaders could never publicly embrace the Trump plan now, given the domestic blowback they would face because of the Jerusalem move.

While Mr. Kushner and Mr. Greenblatt wait for a better moment to release their plan, they have turned Gaza into a side project. Focusing on Gaza, Mr. Kushner said, made sense because no peace accord could succeed without resolving the status of the strip and because improving the fortunes of the two million Palestinians who live there could offer a path to an elusive broader deal with the Palestinian Authority, which is based in the West Bank.

“You have to figure out which cards to play at which time,” Mr. Kushner said. “Getting a positive outcome there could set the momentum for the rest of the process.”

In March, he and Mr. Greenblatt convened a White House conference to galvanize international efforts to rebuild Gaza’s economy. Though the Palestinian Authority boycotted the session, Mr. Kushner and Mr. Greenblatt talked about scheduling another one.

But days after that first meeting, Palestinians began protesting, often violently, in Hamas-orchestrated demonstrations along the fence that divides Gaza from Israel. Since then, Israeli snipers have killed more than 140 mostly unarmed Palestinians, according to officials in Gaza. Adding to the tensions, Hamas is floating flaming kites and balloons into southern Israel, where they ignite wildfires and terrorize the people living there.

“Rather than looking for opportunities to weaponize everything from kites to mirrors in order to attack Israel, Hamas should focus its ingenuity on improving the Gazan economy,” Mr. Kushner, Mr. Greenblatt and Mr. Friedman wrote in their Post article, published last week.

The White House, officials said, is consulting with Egypt and Qatar, which act as mediators in Gaza, to try to head off a broader war. But the United States firmly backs Israel’s right to defend itself. And the op-ed articles suggest that the officials’ emphasis is on making a case against Hamas.

In the article published on CNN’s website, the four officials gave the United Nations General Assembly credit for not reflexively approving a resolution that condemned only Israel for the violence in Gaza (the United States won support for an amendment holding Hamas responsible for its role in inciting the violence). They expressed hope that the United Nations would show a similarly open mind when they roll out the peace plan.

Mr. Kushner and Mr. Greenblatt still favor talks between the Palestinian Authority and Hamas that could result in a unity government in Gaza under the control of the West Bank Palestinians. Hamas, they said, could take part in such a government, provided it agrees to give up violence, recognize Israel and engage in peaceful negotiations.

But diplomats involved in previous — and equally fruitless — Middle East negotiations said those hopes were far-fetched, since Hamas would never give up its weapons. And they warned that getting bogged down in Gaza could actually make it harder, not easier, to strike a broader deal.

“Not only is it not necessary to solve Gaza first, but the interminable delay only makes it that much harder by further entrenching the one-state reality on the ground in the West Bank,” said Frank G. Lowenstein, who served as special envoy for Israeli-Palestinian negotiations at the end of the Obama administration.

Mr. Lowenstein’s predecessor, Martin S. Indyk, said the United States should play a role in easing the suffering in Gaza. But he said the lack of Palestinian unity would make a breakthrough there as elusive as in the West Bank.

“Eighteen months of effort have led them to Gaza, but Gaza is a whole heap of complexities,” Mr. Indyk. “The prospects for progress there are about as promising as the much-diminished chances for the ‘deal of the century.’”