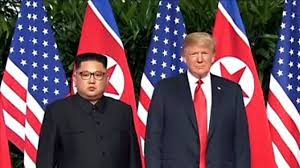 American companies were put on notice this week by the Trump administration that they could face steep fines, or even criminal charges, if their business involves North Korean workers anywhere in their supply chain.

A State Department advisory, published online, also provided the most detailed and comprehensive public listing to date of more than 40 countries and about a dozen industries where North Koreans were employed in 2017 and 2018, in violation of United Nations sanctions. The workers are typically paid a fraction of their salaries, while the rest, as much as 70 percent, is taken by North Korea’s government.

“Dangers can be lurking in global supply chains,” said Anthony Talbott, who heads the University of Dayton’s Human Rights Center. “North Korea is the most brutal, anti-Christian regime in the world. The only reason an American corporation would be contracting with companies using their laborers would be because their prices are significantly lower.”

North Korean workers abroad typically work 16- to 20-hour shifts with only a few days off each month, said the State Department, which describes the system as a type of human trafficking. Their pay supports North Korea’s programs of weapons of mass destruction and ballistic missiles, the advisory said.

“Businesses should be aware of North Korea’s deceptive practices in order to … ensure compliance with applicable legal requirements across their entire supply chains,” the State Department said in a statement Wednesday.

The advisory also names more than 230 North Korean companies that have joint ventures with partners from China and other countries. The companies produce a variety of items, including apparel, small electronics and minerals. American manufacturers, which import about 10 percent of their supply chains, could face legal repercussions if they bought materials produced by those joint ventures.

The North Korean laborers often covet the jobs, which range from construction in Algeria, Kuwait and Malaysia to positions in medical clinics in Cambodia, China and Nigeria. The North Korean government receives hundreds of millions of dollars in foreign currency from their labor, as much as a tenth of its economy, experts say.

“The crackdown on wages is the one of the final and deepest-dive measures to cut off all foreign cash and finances coming into the DPRK,” said George Lopez, who served on the United Nations panel of experts for monitoring sanctions on North Korea.

But he said the advisory was “more bark than bite” because it’s very hard to identify and impose the restrictions.

Enforcement in the U.S. falls to U.S. Customs and Border Protection when it comes to blocking imports produced by North Korean laborers. Immigration and Customs Enforcement would be responsible for criminal charges, and the Treasury Department can issue fines if sanctions are violated.

But those agencies rarely bring cases.

“This is a significant hole in sanctions,” he said.

Ray Kuo, an assistant professor of political science at Fordham University, said fines against companies won’t have much impact unless China and Russia, where most North Koreans are employed, comply.

And he said some in China, Russia and South Korea are pointing to a Singapore summit between leaders of the US and North Korea as justification for relaxing sanctions.

U.S. Rep. Chris Smith, a New Jersey Republican who has been a leading sponsor of legislation to end human trafficking, said the State Department is sending a strong message about the ongoing fight against human trafficking, “both a human rights atrocity and a source of foreign currency for the Kim Jong Un regime.”