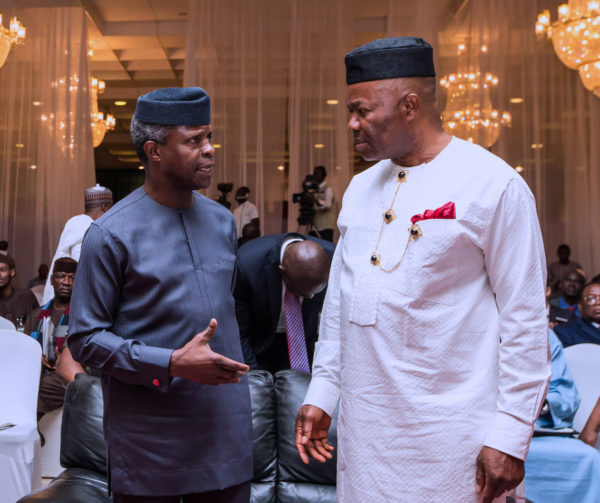 The Peoples Democratic Party might not be having a fun day as the former Governor of Akwa Ibom state, Godswill Akpabio continues his association with APC.

The romance between the All Progressives Congress (APC)  and Senator Godswill Akpabio, the PDP Minority Leader in the Senate,  has unsettled the People’s Democratic Party (PDP).

Akpabio might defect to the APC any moment from now once the “terms” are wrapped up, The Nation has reported.

The APC is upbeat about the prospect, which analysts believe will be a major political mileage for President Muhammadu Buhari in the South-South.

A PDP top notch said last night that the party has been appealing to the ex-governor not to defect “but we cannot please him and then displease the governor of the state, Deacon Udom Emmanuel, who is the PDP leader in the state.”

There is no love lost between Akpabio and Emmanuel. Emmanuel was practically made governor by Akpabio in 2015.

It was learnt that Akpabio had made up his mind to defect on July 24 but was not recognised the Senate President, Dr. Bukola Saraki, who got wind of his move, to make his intention public.

Notwithstanding, Akpabio showed signs of his departure from the PDP on Thursday when he boycotted the special meeting of the National Executive Committee of the PDP held to welcome defectors including Saraki and governors Aminu Waziri Tambuwal (Sokoto) and Samuel Ortom of Benue state, among others.

A top APC source, who spoke in confidence with our correspondent, said: “The APC and some of our leaders are in serious talks with Akpabio, who is rated as a matchmaker in the South-South.

“The talks border on more deals for the South-South, especially increase in derivation formula; enhanced infrastructure for oil producing areas; how to sustain the ongoing reforms by President Muhammadu Buhari; and arresting the developmental slide in Akwa Ibom State.

“The former governor said his likely defection to APC is informed more by patriotism than selfish interest.”

Responding to a question, the source added: “The terms are still being worked out, but APC is favourably disposed to Akpabio’s defection.

“The ex-governor has an open mind, he has no airs and he does not pretend in asking for a better nation which he thinks Buhari can offer.

“In fact, it was part of the talks that made him visit Vice President Yemi Osinbajo on Thursday when the PDP national EXCO was meeting in Abuja.

“We will no doubt accept him into APC. This is a major development from the South-South.”