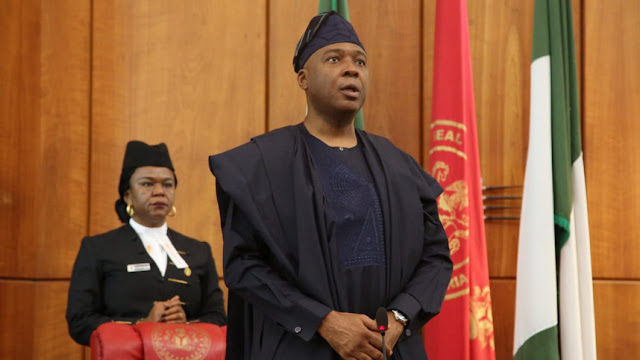 The senate President, Bukola Saraki has been asked to resign from his position or be ready to face certain consequences.

According to a report by Premium Times, a senator, Abdullahi Adamu (APC-Nasarawa), has faulted the defection of the President of the Senate, Bukola Saraki, from the All Progressives Congress (APC) to the Peoples Democratic Party (PDP).

Mr Adamu, who made this known in an interview with journalists in Abuja on Friday, said “Saraki had stepped on banana peel and should be prepared to bear the consequences of his action.”

Messrs Adamu and Saraki, former political allies, have been antagonists since the former accused the senate president of working against the interest of President Muhammadu Buhari.

Mr Saraki earlier in the week attacked Mr Adamu, saying he was a deceptive, manipulative and desperate liar.

“He feels the best way to play his self-survival game and ingratiate himself to the government in order to save his skin is for him to be seen to be fighting Saraki, even if that would require him to tell brazen lies and peddle mischief in his old age,” Me Saraki said of the Nasarawa senator who had repeatedly criticised him.

In his Friday statement on the senate president, Mr Adamu said, “If Saraki knows political intricacies and the political terrain or the path where the banana peel in political landscape is, he will be more cautious.

“The way he is going now, he has obviously stepped on banana peel and only God knows how far he will slip.

“I will not pretend. I think he made a mistake and he took a wrong decision. He will have stories to tell along the line.

“It is not the best he could have done. He had a duty to his father to keep the flag of the family flying but the way he is going, I do not think he is doing that.”

He then urged Mr Saraki to step down to avert consequences, adding that “he should honourably return the crown or be ready to bear the consequences.”

Mr Adamu, who heads a pro-Buhari Support Group in the Senate, vowed that with the defection, it would not be business as usual.

He explained that “the defection of Saraki and the other lawmakers is a game changer.

“We expect them to do it amicably and peacefully. They should make sure they do not run away with our crown.

“If they think they will go and nothing will happen and that it will be business as usual, then they need to think again.

“I will not say whether we will take steps or not take steps. We hope that between now and resumption of Senate plenary, more events will unfold. We do not want to be in a hurry to speculate.”

The lawmaker, however, said that if Mr Saraki insisted on leading a Senate with majority of lawmakers from the APC, there would be repercussions.

On the belief that Mr Saraki did not do anything constitutionally wrong by defecting, and that there was a precedence where former Speaker of House of Representatives, Aminu Tambuwal, defected but remained the Speaker, Mr Adamu said “it will not happen this time. We are more educated on the rules now.”

On gale of defections from the ruling party, Mr Adamu said he would not want any member to leave the party again, noting, however, that it was a free world and everyone was at liberty to join the party of his or her choice.

Apart from Mr Adamu, some other APC senators like Ali Ndume have also called for Mr Saraki’s resignation. The APC National Chairman, Adams Oshiomhole, has also made a similar call.

Mr Saraki, who Thursday attended a PDP executive council meeting in Abuja, has however insisted he would not resign. The APC would also face a herculean task to legally remove him from office based on the constitutional two-third requirement needed. Apart from enjoying the support of PDP senators, Mr Saraki also enjoys the support of many APC senators.