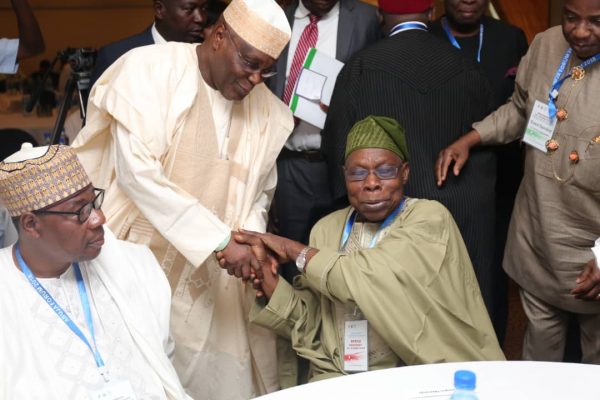 Former Vice President, Atiku Abubakar has responded following remarks by former President Olusegun Obasanjo that God will not forgive him if he supports Atiku’s presidential bid ahead of 2019 elections.

According to Vanguard, Atiku has now replied Obasanjo asking him tidy up his relationship with God, instead of hanging his judgment with God on things concerning him (Atiku).

The erstwhile VP is currently a presidential aspirant of the Peoples Democratic Party, PDP.

The development follows what some had considered as a dilemma for Dr. Obasanjo who supported Muhammadu Buhari’s 2015 campaign but is now a major face against a second term for the incumbent. Atiku Abubakar who served as vice president in the two terms of the Obasanjo civilian presidency between 1999 and 2007 is one of those aspiring to take over Buhari’s office.

Atiku and Obasanjo have, however,  had  issues arising from perceptions of what Atiku allegedly did to undermine Obasanjo as president during the first term of their presidency. Obasanjo has, however, put his opposition to Atiku on insinuations of corruption which, however, have never been established by either Obasanjo or the court of law.

Nobel laureate, Professor Wole Soyinka, however, at the weekend,  claimed ego on the part of the former president, as he alleged that Obasanjo knelt to beg Atiku to help him win the second term ticket of the Peoples Democratic Party, PDP in 2003.

Obasanjo, when asked, in an interview with Premium Times, whether he will support Atiku’s 2019 presidential bid, had said:

“How can I be on the same side with Atiku? To do what?

“If I support Atiku for anything, God will not forgive me. If I do not know, yes. But once I know, Atiku can never enjoy my support,” he added.

“Most of you do not understand the way I operate.  And I thought your own paper will understand better.

“I know Atiku very well. And I have mentioned my position with Atiku. My position has not changed.”

“But  on political ground, my position has not changed. If I support Atiku for a political office other than the one I supported him in the past when I did not know him,” maybe, but not “now that I know him, God will not forgive me.”

The Atiku 2019 Presidential Campaign responding to Obasanjo’s missive at the weekend through its spokesman, Segun Sowunmi, said:

“The first is to say it upfront that HE former Vice President Atiku Abubakar holds former President Olusegun Obasanjo in very high esteem, just as he holds every other leader in Nigeria high esteem.

“The esteem that President Obasanjo enjoys is premised on two things; one, being the former president, Atiku also understands that he cannot and should not desecrate anybody that has sat in the office that he aspires to.

“The second is the fact that they had worked together on a joint ticket as president and vice-president towards the 1999 and 2003 elections, for those two reasons, HE the former vice-president does not want to join any issues with him and respects him and understands that as an individual Obasanjo is within his right to have his point of view.

“Having said that, we are completely convinced that the (Atiku’s) decision to run for the presidency is premised on the condition that this country can benefit from the God-given talents and the experience he has garnered.

“There is nothing that has not been thrown in the way of Atiku to cow him, to break him, to harass him, to intimidate him or to just make him uncomfortable. He has demonstrated that he has the tenacity to withstand it and he has the robustness of mind to remain calm.

“We still believe that in the course of this journey, Chief Olusegun Obasanjo may have to reconsider his stand in line with the wish of the majority of Nigerians, which, in my opinion now, is that of all the aspirants for the office of President, that H.E. Atiku Abubakar has the experience, has the democratic credentials, has the vision, has the workable programme and is in sync with what the Nigeria nation needs now and can leapfrog it to higher levels of development.

“All the same, we will continue to wish Chief Olusegun Obasanjo well and we would want to say that nothing can be further from the truth (that) if Obasanjo follows his Christian dictate he would understand that God that he expects to judge him would not expect him to be a permanent traducer of every other person apart from himself. He has enjoyed the benefits of other people, other people must also enjoy his benefits. Obasanjo cannot be an enemy to every person except himself.”