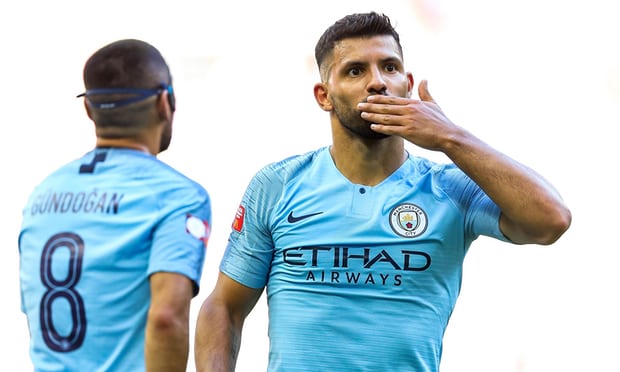 Two goals from Sergio Aguero — his 200th and 201st for the club — proved decisive as Manchester City easily saw off FA Cup winners Chelsea 2-0 to win the Community Shield at Wembley.

City made a positive start, Leroy Sane firing wide after good work by Bernard Mendy down the left, while new signing Riyad Mahrez smacked a free kick into the wall following a foul on Bernardo Silva.

As Chelsea looked to move forward, Callum Hudson-Odoi embarked on a threatening run before he was tackled — but that proved only to be the prelude to a City breakthrough.

Phil Foden created the opening with a driving run before sliding a pass to Sergio Aguero, who took a touch before driving low into the corner past ex-City keeper Willy Caballero from the edge of the box.

City counterpart Claudio Bravo came out to clear as Chelsea responded with a Cesc Fabregas free kick, and at the other end Aguero saw another strike saved.

Mahrez twisted into space on the right before seeing a low cross cleared as Pep Guardiola’s side dominated the opening half-hour, ad they could have been two up after 24 minutes when Sane’s heavy touch enabled Caballero to snatch the ball.

Alvaro Morata tried to curl a shot into the top corner but got it all wrong and ballooned his effort high, and shortly after the half-hour Chelsea had another chance when Fabregas, Morata and Ross Barkley linked before Hudson-Odoi shot over.

Bravo fumbled another Hudson-Odoi strike moments later, with the rebound hacked away as the Chelsea winger caused increasing problems.

Chelsea brought on Ilkay Gundogan for Sane, reported to have picked up a slight knock, as the second half got under way, Pedro hooking in an early cross for Chelsea that Bravo caught.

Jorginho lost possession and Aguero ran towards the area only to drag wide as City threatened to extend their lead, and he missed an even better chance when, clean through, he got past Caballero but hit the side netting with Gundogan unmarked in the middle.

Aguero then set up Foden, whose low drive was stopped by the Chelsea keeper, but with 58 minutes gone Aguero put City 2-0 up.

John Stones started the move with an interception deep in his own half, with Gundogan and Mahrez carrying the move on as City flowed up the pitch and the latter’s pass setting up Aguero to finish low past Caballero.

Chelsea boss Maurizio Sarri responded by bringing on Danny Drinkwater for Fabregas and William for Hudson-Odoi, but City continued to dominate and Mahrez curled an effort wide as they looked for a third goal.

Mahrez was replaced by Gabriel Jesus as Guardiola made his first change of the afternoon, with Chelsea bringing on Tammy Abraham for Morata.

Caballero made a smart save to deny Aguero a hat trick, with another change following as the excellent Foden was replaced by Brahim Diaz, with Victor Moses replacing Pedro for Chelsea as the game entered its last 10 minutes.

Two-goal Aguero was replaced by Vincent Kompany, with the Belgium defender untroubled as City strolled to the most comfortable of Wembley victories, Jesus denied their third goal by Caballero’s save but Moses almost pulling one back after a scramble late on.