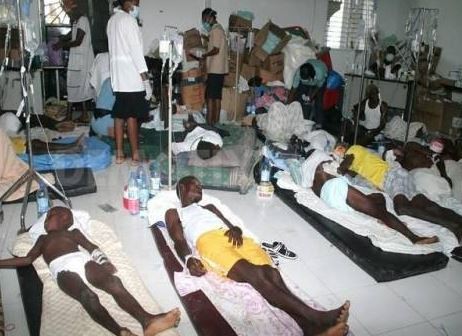 A fresh outbreak of cholera has claimed 11 lives, while 47 others are currently hospitalised at Hanya Madaki, Halin Sarki, and Kunchi villages in Bebeji Local Government Area of Kano State.

One of the youth leaders in the affected area, Ubali Dawud Abubakar, who confirmed the outbreak, said the three villages had been battling the suspected cholera outbreak for over one week, adding that despite reporting to the appropriate authorities, there had been no response.

According to him, the last victim, who died as a result of the suspected cholera outbreak was buried yesterday evening.  Also, a parent of one of the victims, Musa Abdullahi, said about 47 persons had been treated at homes, as well as at some patent medicine outfit, within the affected communities, since the villages hit by the suspected cholera outbreak have no hospitals or clinic.

In his reaction, the Public Relations Officer of the  State Health Ministry, Ismail Garba Gwamaja, claimed that the Ministry was unaware of the outbreak of cholera in the affected villages but promised to investigate the incident to enable the Ministry to take appropriate action.