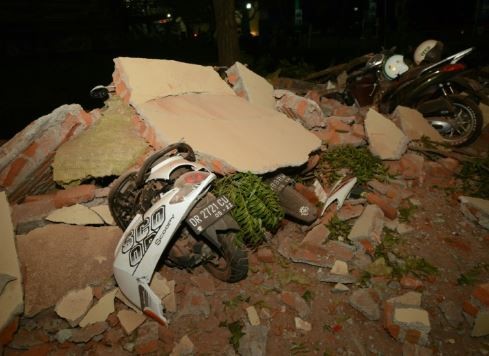 On Sunday, a major earthquake on the Indonesian island of Lombok killed at least 19 people, injured dozens and damaged buildings, officials said.

The seven-magnitude tremor struck just 10 kilometres (six miles) underground, according to the US Geological Survey. It was followed by two light to moderate secondary quakes and nearly two dozen aftershocks.

Many buildings are thought to have been damaged by the quake in Lombok’s main city of Mataram, said Sutopo Purwo Nugroho, spokesman for Indonesia’s disaster mitigation agency.  “They are mostly buildings with weak construction material,” Nugroho said.

Residents in Mataram described a strong jolt that sent people scrambling out of buildings. “Everyone immediately ran out of their homes, everyone is panicking,” Iman, who like many Indonesians has one name, told AFP.

Electricity was knocked out in several parts of the city and patients were evacuated from the main hospital, witnesses and officials said.  Pictures showed patients lying on their beds outside the clinic while doctors in blue scrubs attended to them.