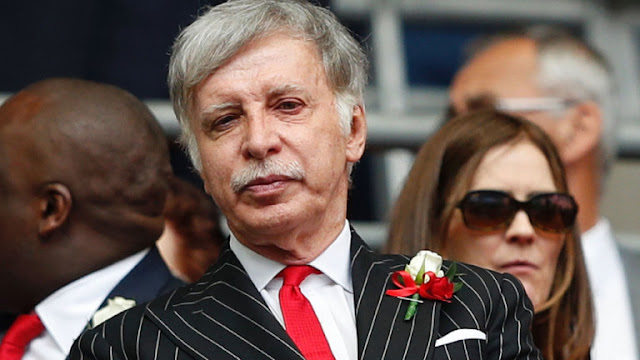 Majority owner Stan Kroenke has made a cash offer to buy Arsenal outright, valuing the club at around £1.8bn after securing the backing of minority owner Alisher Usmanov.

The American billionaire currently owns 67 per cent of the club through his company Kroenke Sports & Entertainment and has offered to purchase the remaining 30 per cent held by Usmanov’s Red and White Securities firm.

In a statement published on the London Stock Exchange, Kroenke said: “We at KSE are moving forward with this offer leading to 100 per cent ownership of the club.
“We appreciate Mr Usmanov’s dedication to the Arsenal Football Club and the storied ethos and history the club represents.”

Kroenke’s company says it has received an “irrevocable undertaking” from Usmanov’s firm to accept the offer as soon as possible, with a deadline of 3pm on Tuesday set.

Kroenke believes private ownership will allow the club to develop and adapt at a faster rate as they look to compete with the growing competition in the Premier League.

“The successful implementation of the offer will result in the opening of a new chapter in the history of the club in bringing 100 per cent private ownership by KSE,” the statement from KSE read.

“KSE believes moving to private ownership will bring the benefits of a single owner better able to move quickly in furtherance of the club’s strategy and ambitions. KSE is a committed, long-term owner of the club.”
The purchase could mean further change at Arsenal after they waved farewell to former boss Arsene Wenger in May following a 22-year spell at the club and welcomed Unai Emery as their new head coach.

Arsenal could be set for another departure, with chief executive Ivan Gazidis set to leave the club to become AC Milan’s executive director in September, according to Sky in Italy.