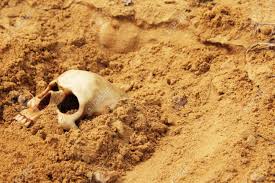 The incident was said to have thrown the sleepy and calm village of Inyi into a state of shock and sorrow. The dastardly act took place on August 3, 2018. Enugu State police command spokesman, Superintendent Ebere Amaraizu, confirming the story said: “It was gathered that one Raphael Izuchukwu believed to be about 40 years from Ugwuagbo Inyi village in Igboeze North Local Government Area of Enugu had on that fateful day killed his elder brother identified as one Chizoba Ogbonna, believed to be about 46 years old and went ahead to bury him.

“Full scale investigations have commenced as the suspect is now helping the police operatives in their investigations. Revelation from suspect had it that he actually killed and buried his brother in the early hours of the said day.

“On why he killed and buried his brother, suspect further revealed that the brother has been sick and that he can no longer bear the cost of his treatment and as a result, killed and buried him. But through intelligence information, the police operatives apprehended him.”