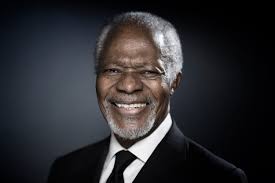 Kofi Annan was born in the Kofandros section of Kumasi in Ghana on 8 April 1938. Kumasi is a city in Ashanti Region, and is among the largest metropolitan areas in Ghana.
Do you even know that Kofi Annan was a twin? Kofi Annan was twin. He has a twin sister named Efua Atta, who died in 1991.
Kofi Annan went to study economics at Macalester College, international relations from the Graduate Institute Geneva and management at MIT
Annan joined the UN in 1962, working for the World Health Organization’s Geneva office as budget officer. He went on to work in several capacities at the UN Headquarters including serving as the Under-Secretary-General for peacekeeping between March 1992 and December 1996.

He was appointed as the Secretary-General on 13 December 1996 by the Security Council, and later confirmed by the General Assembly, making him the first office holder to be elected from the UN staff itself. He was re-elected for a second term in 2001.
Kofi Annan was a master in different languages. He was fluent in English, French, Akan, some Kru languages and other African languages.
In 2007, Annan established the Kofi Annan Foundation, an independent, not-for-profit organization that works to promote better global governance and strengthen the capacities of people and countries to achieve a fairer, more peaceful world.
In 1965, Kofi Annan married Titi Alakija, a Nigerian woman. In case you are wondering, yes that same Titi Alakija (The Richest woman in Nigeria). The couple separated in the late 1970s and got divorced in 1983.  They had a daughter and son named Ama and Kojo respectively.
Post Views: 109
Share Facts You Probably Don’t Know About Asake and His Biography