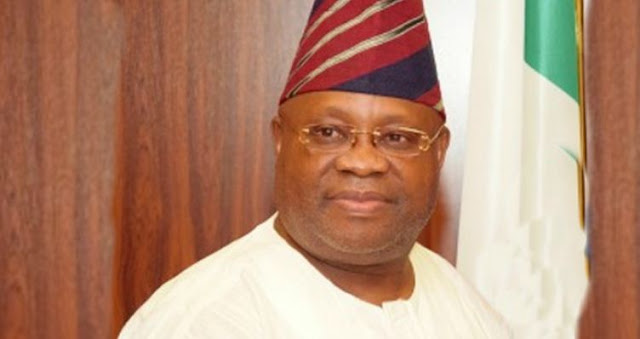 The police on Wednesday arraigned the Peoples Democratic Party’s governorship candidate in the September 22, 2018 election in Osun State, Senator Ademola Adeleke, and four others, on charges of examination malpractices.

The defendants were arraigned before Justice I.E Ekwo of the Federal High Court in Abuja, where they all pleaded not guilty to the four counts preferred against them.

The rest of the defendants alongside whom Adeleke was arraigned were, Sikiru Adeleke; the principal of Ojo-Aro Community Grammar School, Alhaji Aregbesola Muftau; the registrar of the school, Gbadamosi Ojo; and a teacher in the school, Dare Samuel Olutope.

The prosecution accused the five defendants of committing the offence of examination malpractices by fraudulently, through impersonation, registering Adeleke and another Sikiru Adeleke, as students of Ojo-Aro Community Grammar School, in Ojo-Aro in Osun State, for the National Examination Council’s June/July 2017 Senior School Certificate Examination in February 2017.

Shortly after the defendants took their pleas, on Wednesday, three of them, including Adeleke, who had filed their separate bail applications ahead of the arraignment, were granted bail.

The fourth and the fifth defendants, who were represented by Mr. Isaac Adeniyi during the previous proceedings of October 15, 2018, were not represented by any lawyer on Wednesday.

‎The two of them were remanded in prison due to the absence of their lawyer and failure to file their bail applications ahead of the proceedings.

But the three others, whose bail applications were not opposed by the prosecuting counsel, Mr. Simon Lough, were granted bail by the court.

In a short ruling, the judge noted that the three defendants were entitled to be granted bail as they were presumed innocent and having been granted administrative bail by the police without any complaint of them flouting the bail conditions.

Considering Adeleke’s status as a serving senator, the judge granted bail to him based on self-recognition but with a directive that he must enter into a bond to assure the court that he would always be present in court for his trial.

The judge also directed him to deposit his passport with the registrar of the court and must not travel out of the country without the permission of the court.

The two others were granted bail in the sum of N2m each with one surety each who must be a “responsible” citizen and owner of landed property in Abuja.

They too are to deposit their passports with the court’s registry and are not to travel out of the country without the court’s permission.

The arraignment was initially stalled on October 15 due to Adeleke’s absence from court, although the rest of the defendants were present.

His lawyer, Izinyon, reported to the judge that the serving senator could not be in court because he fell sick.

Due to the development, the judge adjourned till Wednesday and directed the prosecution to ensure that Adeleke was in court for the arraignment.

On Wednesday, Adeleke and other defendants attended court on their own.

Decked in a grey coloured attire with a cap, Adeleke was already seated in the courtroom before the judge commenced sitting at about 9.07am.

Following a request from the prosecuting counsel, Lough, Justice Ekwo adjourned the matter till December 17, 18 and 19 for the commencement of trial.

The judge directed that the prosecution must ensure that its witnesses were available in court on those dates.

In the first count preferred against the defendants, the prosecution alleged that the five defendants “conspired to commit felony, to wit: examination malpractices, and thereby committed an offence contrary to section 10 of the Examination Malpractices Act Cap E15 LFN 2004”.

In count two, the prosecution alleged that the three members of staff of the school acted in concert by aiding and abetting “the commission of examination malpractice by personation” when they alleged “registered Senator Ademola Adeleke and Sikiru Adeleke” while knowing or having “reasons to believe that they are  not students of the school”.

The alleged offence was said to be contrary to Section 9(1) of the Examination Malpractices Act Cap E15 LFN 2004.

In count three, the two Adelekes were accused of acting in concert, and “personated as students of Ojo-Aro Community Grammar School, when you fraudulently registered as students of the school in the June/July, 2017 NECO”.

The offence is said to be contrary to Section 3(2) of the Examination Malpractices Act Cap E15 LFN 2004.

The fourth count was said to be contrary to Section 10(a) and punishable under Section 3(2) of the Examination Malpractices Act Cap E15 LFN 2004.