Sequence to his super, ever inspiring, wave making, soul uplifting, ever green and ever relevant hit single Sade which got him signed to YBNL record label imprint of Olamide.

Adekunle Gold proves to the mass that there is more he can offer us all apart his revealing and realest photo-shopping talent.

In 2014, Adekunle went solo after he disbanded a music group he formed with a friend while in school. On 19 December 2014, he released a cover of One Direction’s Story of My Life titled Sade, which rose to critical acclaim and went on to be nominated at the 2015 edition of The Headies.

ALSO READ:Fathia Balogun And A 30-Year Old Young Man Who Wanted To Date Her

After the release of Sade, Adekunle Gold released his first official single titled Orente through YBNL Nation after signing a music contract with the record label on March 5, 2015. He was nominated in the Most Promising Act of the Year category at the 2015 City People Entertainment Awards.

On 18 July 2016, Adekunle Gold revealed the cover and track list of his debut studio album titled Gold. The album is a 16-track project, with musical production from Pheelz, Masterkraft, B Banks, Sleekamo, Oscar and Seyikeyz. It was released on 25 July, three days before the original scheduled date of release.

Upon its release, it peaked at #7 on the Billboard World Album Chart for the week of 13 August 2016.

Moreover, it was critically reviewed by contemporary music critics. Following his departure from YBNL Nation due to the expiry of his contract, Adekunle Gold unveiled his band “The 79th Element” in reference to the atomic number of gold.

On the 15th of January, 2018, Unity Bank unveiled Adekunle Gold as her brand ambassador.

So far, he has gotten 9 awards nominations since 2015 till date and has won them all. Isn’t that an impressive record to bank on?

See the list of the Awards he has won below:- 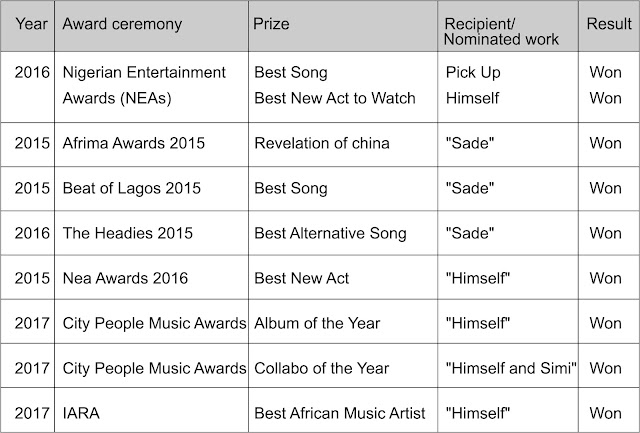