The Former Governor of Ekiti State, Ayo Fayose has reacted to the killings in Kaduna State. 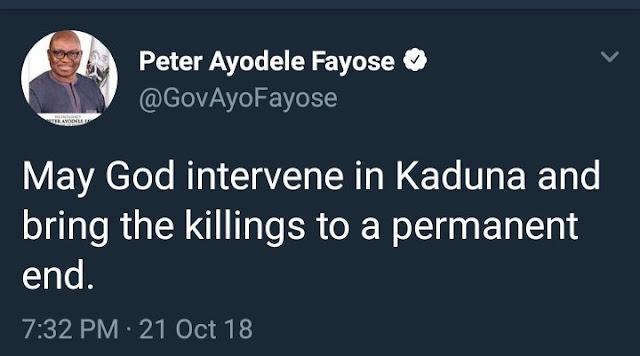 It will be recalled that Naija news  last week reported that up to 55 people were killed on October 18 crisis at Kasuwan Magani in Kajuru Local Government Area of Kaduna state.

It was also gathered  that a similar crisis in February left more than 10 people dead in Kasuwan Magani, while 65 suspects involved in the crisis were arraigned in court but the case is still ongoing. Governor El-Rufai, after declaring a 24-hours curfew, also in the early hours of today, visited survivors of yesterday’s Kaduna violence in hospitals. He took time to visit the survivors at the Barau Dikko Teaching Hospital and St. Gerald’s Hospital.

By Bright Bini
1 Mins read
The Special Anti-Robbery Squad (SARS) of the Command arrested them, as well as four others who allegedly committed other robbery incidents. Police…
Uncategorized

NNPC will be commercialised - Petroleum minister

By Akande Michael
1 Mins read
Graham Medway,62, was charged following an investigation into raping a 3-year-old girl in woodland on the Isle of Wight, last month in…