MOURINHO Said he Will Not Celebrate If He Wins Against Chelsea

Manchester United boss Jose Mourinho insists he will be on his best behaviour on his return to Stamford Bridge on Saturday, but hopes his side inflict Chelsea’s first defeat of the season. 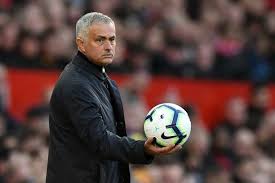 The Portuguese won three Premier League titles for Chelsea in two successful spells in charge of the Blues, but has lost all three of his previous visits to Stamford Bridge as United manager without even scoring a goal.

Though Mourinho claimed that the fixture is now just like any other as far as he is concerned, he also conceded that he would not celebrate should United break that run to ease the mounting pressure on their manager.

I think I would try to control myself and to respect the stadium and the supporters that were my supporters and stadium for many years.

Two seasons ago, Mourinho clashed with former Chelsea boss Antonio Conte when he claimed the Italian had showed a lack of respect for whipping the home fans into a frenzy during a 4-0 thrashing of United.

The visitors are desperately in need of a win this weekend as they already trail Premier League leaders Manchester City, Chelsea and Liverpool by seven points after just eight games.

I want to do well for my team, players, support. I am 100 percent Manchester United tomorrow – no more space for anything other than respect for the stadium and the fans, added Mourinho.