See Formal BBNaija’s housemate Cee-C and Leo Fuel Break Up Rumours and Unfollow Each Other On Instagram.

It looks like all is not that rosy with most of your Big Brother Naija faves as former housemates, Leo Da Silva may have stopped following Cee-C on Instagram.

Although the highly controversial housemate did not confirm and deny the news, our finding also reveals that Cee-C has equally unfollowed Leo on Instagram. 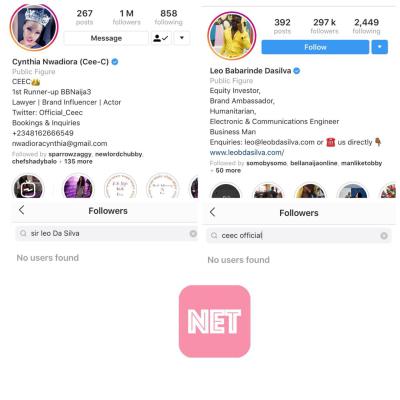 This singular move has sparked off various reactions from fans who are somewhat aggrieved that their favourite Fresh Air gang may be ‘breaking up.

As it was with the cases of their fellow celebrities like Alex, Tobi, Lilian Esoro and Mercy Aigbe, we smell trouble between the unconfirmed lovebirds because it’s usually a norm for celebrities, when they have misunderstandings with their partners, to either unfollow each other or delete each other’s photos from their pages.

The lovers who were not close until they both left the big brother house, have been complementing each other and have been dishing couple goals.

We hope all is well between the two lovebirds though.