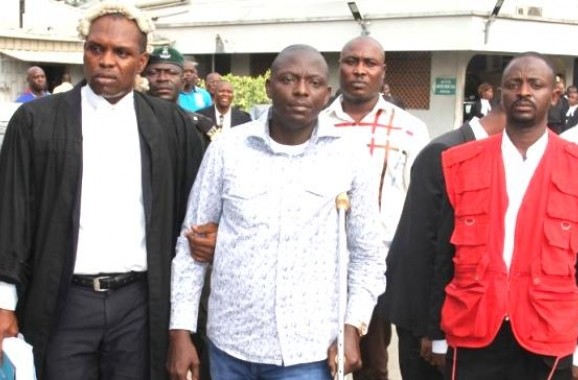 The trial of former Director-General of the Nigerian Maritime Administration and Safety Agency (NIMASA), Patrick Akpobolokemi, took a dramatic turn
at an Ikeja High Court yesterday Monday November 5th after three co-defendants made a u-turn to become prosecution witnesses for the Federal government against Akpobolokemi. Upon the decison of his co-defendants, Akpolokemi, developed a severe case of diarrhea inside the court and had to excuse himself twice to use the restroom.

Following a plea deal Nwakuche, Juan and Olopoenia struck with the EFCC to testify for the prosecution, Akpolokemi now faces trial alongside Agaba and Udoye who are both former Executive Directors of NIMASA.

Ekene Nwakuche, who is the tenth prosecution witness and a former Personal Assistant (PA) to Adaba, told the court yesterday how the three defendants allegedly embezzled funds while at the helm of affairs at NIMASA.

Nwakuche said he was privy to a lot of illegal transactions as a result of being a Personal Assistant to Agaba. The former PA noted that he had made various withdrawals worth millions of Naira on behalf of Agaba and that funds were illegally transferred into bank accounts belonging to acquaintances of the defendants.

“On Sep. 29, 2014 there was a debit of N11 million which was made into the account of Lakewood Garden Venture Ltd, the beneficiary was Captain Aneke, a Maritime Commandant in NIMASA. I do not know what he got the N11milliom because he was not part of VIMSAS and I don’t know any product or service or product Lakewood Gardens provided to VIMSAS. On 23, Feb. 2015, there was a transfer of N10 million to Mr Bongos Ikwe, he is an associate of Agaba, they are both from Benue State,  I guess the money was for a land transaction,” he said.

Nwakuche said that funds that were approved for VIMSAS by the office of the NSA were withdrawn from the bank, converted to dollars and handed over to Akpolokemi and Agaba.

He said the total deposit to the VIMSAS account was N816 million and that N752.3 million was debited by the defendants in a total of 36 times.

Justice Raliatu Adebiyi adjourned the case until Nov. 30 for continuation of trial.