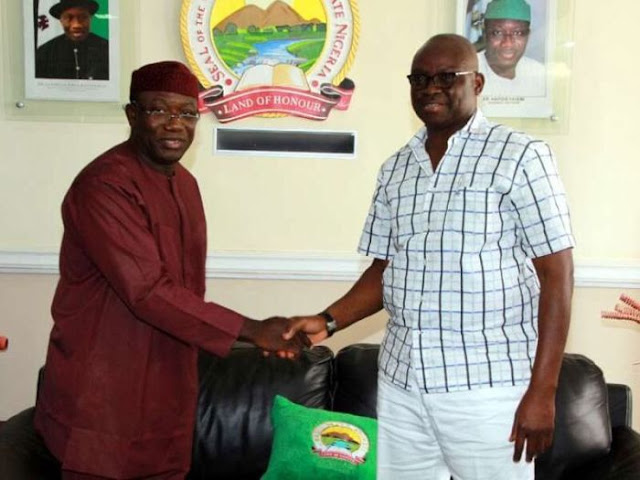 The Peoples Democratic Party (PDP) members from the Ekiti State House of Assembly yesterday said that it was the immediate past governor of the State, Mr. Ayodele Fayose that directed them to support Governor Kayode Fayemi in the interest of Ekiti.

This is just as they denied that they have decamped to the opposition All Progressives Congress (APC).

They made the disclosure yesterday when the Deputy Speaker, Mr Adewumi Olusegun briefed newsmen in Ado Ekiti on behalf of other caucus members.

He said, “We remain committed members of the PDP as against insinuation in some quarters that we have decamped to APC.

We make bold to say that our support for the state governor, Dr. Kayode Fayemi was at the instance of the outgone Governor Ayodele Fayose who directed that we should co-operate with the governor-elect then in the interest of Ekiti State.

It was on this premise of the advice that we acted because Ekiti agenda is bigger than any individual or political party.”

Olusegun said that Senator Olujimi is the most eminently qualified at the moment to be in the leadership position as the highest political office holder presently in the state.

He described those having a different opinion as “mischievous, lazy and political jobbers as there is no contest about the leadership of the party since the position is not contested for but earned.”

Olusegun described the House of Reps members in Ekiti as ‘yes men who are not capable of having an opinion of their own’.

The lawmakers declared that Tope Aluko, the erstwhile secretary of the party in the state, remained a bonafide member of the PDP and was not at any time expelled.