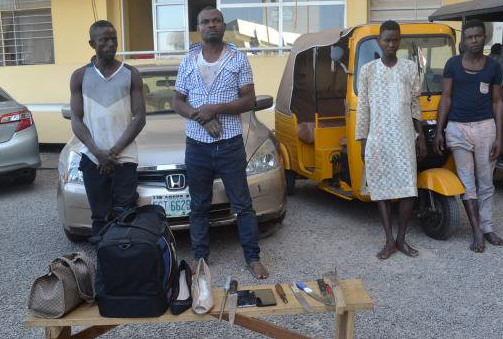 The FCT Police Command has arrested three men for their alleged involvement in one chance
robbery. Acording to the Police, the suspects identified as Onyebuchi Ifeanyikwu ‘m’ 40 years, Anthony Sunday ‘m’ 35 years and Usman Ali ‘m’ 19 years and Sani Bala ‘m’ 19 years, specialise in robbing their victims of valuables and using dangerous weapons to inflict injuries on them.

Items recovered from them include female under-wears, four sharp knives, one nail, one wood containing a nail, one screw driver, one infinix phone, some jewelries, one bag containing women clothes belonging to one of their victims and a golden colour Honda Accord car with registration no: FST 662 BG.

On 10 November, 2018 at about 0200hrs following a discreet investigation, operatives of the Anti-One Chance Squad arrested one Onyebuchi Ifeanyikwu ‘m’ 40 years and Anthony Sunday ‘m’ 35 years at their hideouts in Tungan Maje. “The suspects robbed and inflicted serious injuries on a lady who boarded their car as a passenger en-route Nyanya from Arab road Kubwa on 9th November, 2018 at about 0530hrs.

Few minutes into the journey, the suspects diverted their victim to Zuba axis where she was robbed of her cash, phone, two ATM cards and other valuables before she was abandoned. She was rescued and taken to Police hospital Deidei Barracks where she was treated and discharged.

When interrogated, one of the paraded suspect gave an account of how they carry out their operation.

On 2nd November, 2018 at about 0900hrs following a compliant, Police operatives from the Command Anti-One Chance Squad arrested Ali and Bala who operate in a tricycle to rob unsuspecting members of the public. The suspects were arrested after one of their victims who were robbed by the gang at Gwarimpa axis complained to the Police operatives” he said

The Police said the suspects will be arraigned in court upon the conclusion of the investigation.