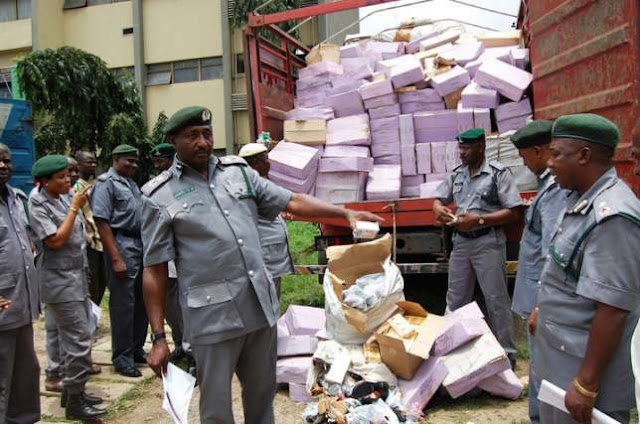 The Nigeria Customs Service (NCS), Federal Operations Unit (FOU), Zone B, has seized 51 vehicles loaded with foreign rice and other
prohibited items.
The items were smuggled into the country into through Katsina State borders in the last one month.

The FOU Comptroller, Mr Sarkin-Kebbi Mustapha, who disclosed this at a news conference in Katsina on Monday, said that the seized items have Duty Paid Value (DPV) of N120.6 million.

He listed the items to include 1,534 bags of foreign rice, 3,013 cartons of spaghetti, 86 bags of foreign sugar, 145 jerry cans of vegetable oil and 50 bales of second hand clothes.

He said that the officers were able to arrest three persons in connection with the smuggling activities during the period under review.

The comptroller, who expressed dismay over smuggling activities in the state, said that those arrested would be prosecuted to serve as deterrent to others.

“There is the need for serious sensitisation on the dangers of smuggling activities, because some of these people think what they are doing is legitimate.

“They think they are using their money to bring in these goods to sell and make profits, forgetting that there are rules governing international trade.

‘’We are making seizures every day, but these people are still adamant.

‘’So, agencies like NOA should continue to sensitise border communities on the dangers associated with smuggling on the economy and on the health of the people,’’ he said.

He said that sometimes,smugglers mobilise mob action against customs officers, which made the officers to shoot into the air with aim of dispersing them to protect themselves.