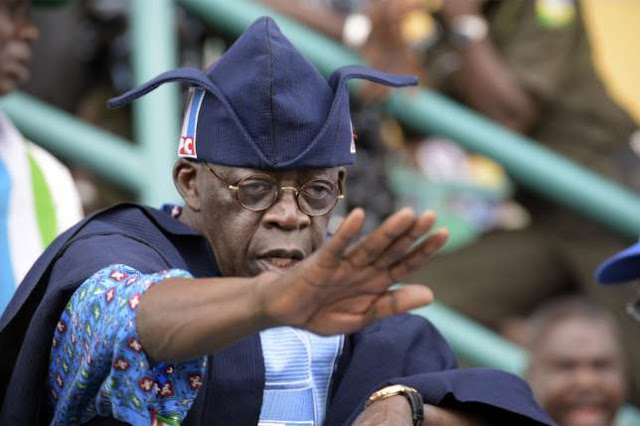 Acting Chairman of the Economic and Financial Crimes Commission (EFCC), Ibrahim Magu, found himself in an awkward position on
Monday, November 12, 2018, when a journalist asked him about corruption allegations often aimed at APC national leader, Bola Ahmed Tinubu.
Magu was giving a scorecard of his agency’s work at a press conference which held at the EFCC headquarters in Abuja, Nigeria’s capital.

Responding, Magu said he can only act on allegations contained in a petition, and not on hearsay.

And then he challenged the journalist to forward him a petition containing Tinubu’s alleged dubious dealings and illicit accumulation of wealth.

“It is not for us to listen to people on radio and begin to act. Yes, we have intelligence but the surest way to get action is to go and write a petition and substantiate the contents of the petition and see whether I will not act”, Magu said.

When would Magu probe Tinubu?”
‘When will Magu probe Tinubu who had claimed, ahead of the Osun governorship election, that he was richer than the entire Southwest state?’, one journalist inquired.

Tinubu belongs to the president’s governing political party and allegations bordering on the source of his wealth since he left office as governor of Lagos in 2007, have dominated grapevine and beer parlour chatter for decades.

Tinubu has been arraigned for alleged corruption before
In 2011, Tinubu was docked at the Code of Conduct Tribunal (CCT) for allegedly operating 10 foreign accounts during his spell as governor between 1999 and 2007.

However, the tribunal swiftly dismissed the case against the former Lagos governor after it established that the Code of Conduct Bureau (CCB) did not establish a prima facie case against him.

CCT Chairman Danladi Umar also ruled at the time that the prosecution abused the process of filing the charges against Tinubu and that “the accused should have been invited to either admit or deny the charge. The complainant has no evidence to show that they invited the accused.

The three-man panel of the tribunal dismissed the case at Tinubu’s second appearance, declaring that “there is no significant basis to proceed against Tinubu as the charges were defective and shoddy”.

Umar had added that “some (of the foreign accounts) even bear female names…how can the accused be made to answer such charges?”

Tinubu hasn’t been charged for corruption since his CCT appearance.