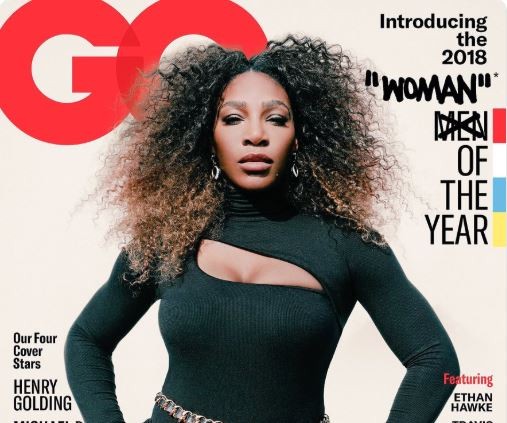 Serena Williams has been named GQ Woman of the Year 2018, making her one of four
honorees to be featured on the cover of GQ’s 23rd-annual Men of the Year issue.

Williams shares the honor with Director of the Year, Jonah Hill, as well as actors Henry Golding (Star of the Year) and Michael B. Jordan (Leader of the Year).

Talking about the GQ Woman of the Year 2018 awarded to the tennis star, the magazine said:

“No matter how you cut it, Serena Williams had a remarkable year. Jeanne-Marie Laskas visits the G.O.A.T. at her Florida home to hear about the U.S. Open moment heard around the world, along with Serena’s plans for the future, her thoughts on Brett Kavanaugh’s Supreme Court appointment, and what it’s like to be a black woman in America in 2018.  All that, plus GQ worked up a special surprise cover collaboration with Virgil Abloh the Off-White designer behind her coolest on-court looks in 2018 featuring his signature quotation marks in his own handwriting.”