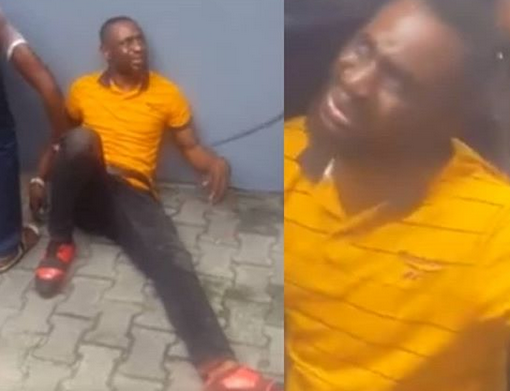 A graduate of criminology from the University of Port Harcourt who gave his name as Ifeanyi Dike, was apprehended on Tuesday while trying to steal from a bank in Port-Harcourt, Rivers state.

A viral video of him being disgraced at the bank, shows a security officer saying ‘this is the second time he has been apprehended trying to steal within the bank premises’.

He would move from bank to bank, disguising as a customer who wants to do a transaction before looking for victims to steal various properties from including cash or phones.

He was given serious beating before handed over to the police.

Watch a video from the scene below

View this post on Instagram
Criminology graduate who goes from one bank to the other to steal apprehended in Port Harcourt. This would be the second time he would be arrested for stealing in this particular bank… So much for a criminology graduate…. #LIB #LindaIkejisblog
A post shared by LIB – Linda Ikeji Blog (@lindaikejiblog) on Nov 13, 2018 at 10:03pm PST