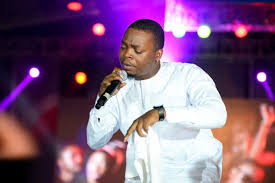 This year’s edition of #OLIC5 will be going down on December 23rd at the Eko Convention Center, Lagos.

Olamide on stage during the fourth edition of #OLIC at the Teslim Balogun stadium (Pulse)
Olamide has officially confirmed the date and venue for the fifth edition of his annual concert, ”Olamide Live In Concert.”
#OLIC5 will be going down on Sunday, December 23rd at the convention centre of the Eko Hotel and Suites.

Earlier in the month, Olamide had posted a tweet, which read, “#OLIC5 23rd of December 2018 @ Eko hotel convention center” but news soon emerged that another huge name, Wizkid has announced his own concert scheduled for same date, leading some to speculate there will be a change in the dates.

The rapper has now confirmed via his Instagram page on Wednesday, November 14, that all is set for the fifth edition of the concert to go ahead as announced.

OLIC is an annual headline concert by the rapper, where he gets to relate more with his fans who have supported him on the journey that has led to him becoming one of the leading names in the Nigerian music scene.

The first three editions of the event was held at the Eko Hotel and Suites, with Olamide breaking from the norm with the last edition as he sought to sell out the Teslim Balogun Stadium. Even though that feat wasn’t achieved, the turn out was impressive and his mainland fans had a first hand taste of one who wields a major influence in that axis.

After a slow start to the year, Olamide is ending strongly with songs like ‘Motigbana’, ‘Kana’, ‘Criteria’ and ‘Bugle’ becoming instant hits upon their release and the concert will be the crowning glory of his 2018 run.