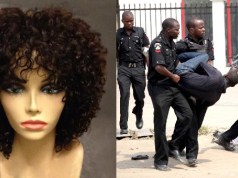 A 23-year-old gate man, Akpan Ekemini, who police accused of allegedly stealing wig, valued at N125, 000, belonging to his boss on Tuesday, appeared before an Ogudu Magistrates’ Court, Lagos.

The prosecutor, Insp. Lucky Ihiehie, told the court that Ekemini committed the offence on November 9 at Ogudu GRA, Lagos.The same date, he said, the complainant, Mrs Josephine Iniedu, reported the crime to the Ogudu Police Station.

The prosecutor alleged that the accused stole his boss’ human hair wig, valued at N125, 000; two bicycles, valued at N40, 500; a Blackberry phone, and a wall fan.

Ihiehie alleged that during questioning, the accused admitted to the police that he stole the said items and sold same to one Ezekiel, a cook, for N7,000.

The offences, the prosecutor said, contravened the provisions of Sections 287 of the Criminal Laws of Lagos State 2015 (Revised).

The News Agency of Nigeria reports that Section 287 stipulates a seven-year jail term for stealing.

The accused, however, pleaded not guilty to the charge.

Magistrate E. Kubeinje, admitted the accused to bail in the sum of N100, 000 with two sureties in like sum.

Kubeinje ordered that the surety must be gainfully employed and present evidence of two years tax payment to the Lagos State Government.

She adjourned the case until December 19 for mention.