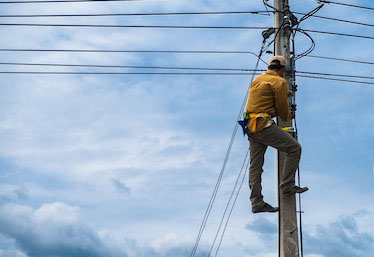 A member of the All Progressives Congress (APC) member, Jamilu Tukur has been electrocuted while he was hanging pictures of President Buhari and Governor Mohammad Badaru on an electric pole.
The incident occurred in Kudai community in Dutse Local Government Area of Jigawa state on Saturday, November 10, 2018.

According to Premium Times, the Leader of a community-based organization in Dutse, Yusif Mohammad described the deceased (25 years) as a die-hard member of APC.

Mohammed said “He has contributed a lot towards the development of the party, he was not among the people that were selected to paste the banners, he suddenly appeared and agreed to climb and hoist the banner.”

While reacting to Jamilu’s death, his father, Mr. Tukur said it as an act of God.

He said “No one can change what Almighty God has destined to happen, the late Jamilu is a good Samaritan loved by all.

“The number of people that registered their condolence in my house is a justification that my late son has a good rapport with people. My thanks goes specifically to Governor Mohammad Badaru for sending me N100.000 and Dutse council chairman for the gift of N15.000 and two bags of rice, one carton of Spaghetti, and a gallon of cooking oil.”

The police said “The victim was rushed to Rashid Shekoni Specialist Hospital Dutse but died immediately on arrival at the hospital. No foul play suspected, case under investigation.”

Kudai community is known as one of the strongholds of the All Progressives Congress (APC) in Jigawa state.