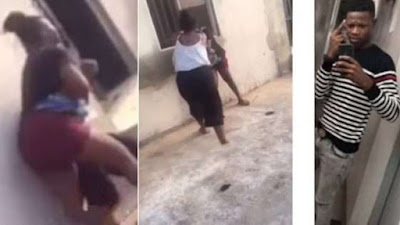 It’s another day and another seeming validation that men are scum, in all ages, including University amongst levers.
Hence the mad response to the fight which broke out on
November 13, 2018, fight broke out at Limelite Hall, Olabisi Onabanjo University, Ogun State, over boyfriend-snatching allegations.

According to Instablog9ja, one Blessing had been dating one Saheed and one Bolu was a friend. The story paints Bolu as a seller of merchandise who needs to market her products.

Thus, Bolu picked Saheed as a potential customer to market her products to which Blessing probably knew about and consented to. There was one problem though; Bolu allegedly did more than she promised, she slept with Saheed.

More worryingly, Blessing felt they had sex more than once — with one romp even happening on her bed. What Blessing did next was to lead her ‘squad’ to Bolu’s hostel at 6:30 am in the morning to have her revenge on her ‘friend.’

They reportedly broke down her door, dragged her out of her apartment and the fight ensued. Bolu, however, maintained that she only slept Saheed once.
.
According to the accusers, headed by one Blessing, Bolu slept with her boyfriend, Saheed, on multiple occasions, under the guise of marketing some products to him.

View this post on Instagram
OOU students fight over boyfriend . . A fight broke out, this morning, at Limelite Hall, Olabisi Onabanjo University, Ogun State, over boyfriend-snatching allegations levelled against a 200 Level student identified as Bolu. . . According to the accusers, headed by one Blessing, Bolu slept with her boyfriend, Saheed, on multiple occasions, under the guise of marketing some products to him. . . Blessing led her team to Bolu’s hostel, as early as 6:30a.m, today, broke her door and dragged her out. While the accused admitted to sleeping with Saheed only once, Blessing insisted that they did it many times, even on her (Blessing’s) bed.
A post shared by Instablog9ja (@instablog9ja) on Nov 13, 2018 at 5:22am PST