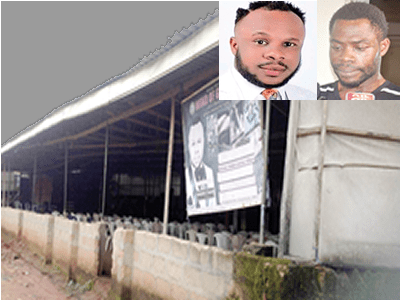 The chilling story of the coldblooded murder of Pastor Blessed Kelechukwu Iwuanyanwu aka Apostle Blessed Kizito of Wind of Glory International Church, an
Umuahia-based Pentecostal church, at first sounded like an episode in one of the Nollywood movies. But it turned out to be true.

The pastor was murdered along with his assistant, Pastor Ikeagwu Kalu aka Ambassador, and women leader, Ruth Andrew Eze.

The Wind of Glory International Church where Iwuanyanwu presided before his gruesome murder is a church of not more than 200 members.

It is behind the Ohokobe Hall on Umuahia-Ikot Ekpene Road. Part of the wall of the church is not yet plastered. The back of the church rests on the fence. It has an entrance without door, so it is always open.

As at the time our correspondent visited the church, it was empty.

The incredible murder of the pastor and his lieutenants was uncovered when operatives of the State Criminal Investigation and Intelligence Department (SCIID), led by the Deputy Commissioner of Police, Mr. Patrick Edung, on October 20, 2018, discovered the decomposing bodies of the victims.

They were found in Iwuanyanwu’s residential apartment. The pastor lived at Umuobia Housing Estate, where the other two had gathered for prayers.

It was right there in that apartment that the three met their untimely death. While the police were sniffing for clue to the murder case, the daughter of Ruth, Sweeney Andrew Eze, reported the disappearance of her mother to the Zone 9 Police Command Headquarters, Umuahia.

Sweeney reported the matter on October 16. She alleged in the report that on October 12, about 11p.m., Iwuanyanwu, who happened to be the founder and owner of Wind of Glory Ministry, came to their residence at Ehimiri Housing Estate, with her mother and shortly left with her in his SUV Infinity Jeep, marked RSH 583 HZ, to an unknown destination.

She added that the next day, October 13, when Ruth did not return as expected, she called her two mobile phone numbers, but the numbers were unreachable. It then dawned on her that something was amiss.

On October 20, she called the police and informed them that her mother had been murdered, along with Iwuanyanwu and Kalu Ikeagwu.

One of the police investigators said: “The mechanic, Mr. Chibuike Peter, who was in custody of the vehicle for repairs at Ohiya, was traced to Umuokpara Police Station where he was detained over a Road Traffic Act (RTA) case. He identified the duo of Prosper Akachukwu Peter, Ikechukwu Nnadi and Fidelis Akubuokwu as those that gave him the car to repairs. They were arrested.”

During interrogation, one of the suspects, Prosper, confessed to killing the victims. He disclosed that he killed them with the assistance of three other men, who were at large.

The police found that Prosper also removed some of the personal effects of Iwuanyanwu in addition to his vehicle.

Prosper said that he and the late Iwuanyanwu were from Imo State. But while he is from Mbaise, Iwuanyanwu was from Mbano. He said that the two of them were best of friends.

Prosper said: “We both attended the same secondary school and started our gospel ministries together. We were both preachers. Iwuanyanwu was my childhood friend and we were also co-pastors. When he was having challenges in growing his church I took him to a native doctor in Ondo State to get charms to attract members to his church. The charms also help him to perform miracles. I also gave him N100,000 to support him during the trip.

“We started the process in 2013 and we have been going to the shrine to renew the charm every year since then. But when the charm started working and Iwuanyanwu started making money, he forgot me. Whenever I called him for financial assistance, he would tell me not to disturb him, which was why I decided to attack and collect some of his personal belongings.”

According to him, he sat down and planned how to get back at Iwuanyanwu. He hit on a plan and decided to see it through. He hired three assassins from Aba to help him execute his plan.

“I hired three boys from Aba to attack the pastor. We trailed him to his house when he was going home and laid an ambush for him. We waited until midnight, when we knew he would return home,” Prosper said.

The suspect contradicted himself when he said: “I was outside when the boys started the operation. They invited me in when they were through with the operation. I entered and found out that they had killed Iwuanyanwu and the two other people in the house.”

According to people that know Prosper, he is the only son of his parents, but is disposed to criminal ways. It was further alleged that Iwuanyanwu started avoiding Prosper because he was no longer comfortable with his criminal ways.

It was learnt that because of pressure from Prosper, Iwuanyanwu finally agreed to meet him at Shoprite Umuahia, from where Iwuanyanwu took him to his house and fed him with noodles.

After Iwuanyanwu took Prosper to his home, it was easier for the latter to later trace the house.

After murdering Iwuanyanwu, Ruth and Kalu, the suspect helped himself to some of Iwuanyanwu’s property. He took some of the items to his father, presenting to him as gifts. The father, a battery charger, based in Aba, refused to accept the ‘gifts.’

After he was rejected by his father who doubted the source of the sudden change of fortune, he went to his father-in-law at Obowo in Imo State and invited his in-laws to celebrate with him.

There, he left two of the Plasma television sets, rice and cash for his father -in-law and his (Prosper’s) wife, Precious, who he does not live with.

A police source disclosed: “The suspect had no residential address. He lives in hotels and moves from place to place. After killing the victims, Prosper went to Iwuanyanwu’s house the next morning with the bodies still lying in their blood, took his bath and changed into Iwuanyanwu’s clothes. He was answering calls to Iwuanyanwu’s phone. He posed as Pastor Iwuanyanwu, replying to inquiries about his whereabouts and health. He told callers that he was praying or attending to programmes. That was why Iwuanyanwu’s church members could not discover on time that he had been killed. By the time the members discovered Iwuanyanwu’s corpses and the other two, they were already decomposing.”

Prosper then went out to bring an auto electrician to start the SUV for him.

“He lied to the auto electrician that the SUV key fell into dirty water. This was probably to cover the fact that the key fell into the blood. He was shamelessly using the pastor’s SUV, dresses, including his shoes, crucifix and staff before he was arrested,” the source said.