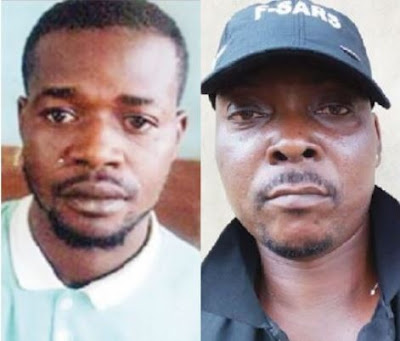 Adetiba Sunday, an aluminium fabricator, on Thursday, narrated to a presidential panel how an officer
attached to the Federal Special Anti-robbery Squad, Magbon, Abeokuta, Godwin Ogedengbe, shot him in the leg.

Sunday told the panel that he was at his workplace when Ogedengbe and his team members arrested him. The panel, which was set up by the then Acting President, Prof. Yemi Osibajo, is saddled with the responsibility of hearing and investigating complaints against the SARS and make recommendations to the government on how the police unit can be reformed.

The panel began hearing the complaints on Tuesday and at Thursday’s sitting, Sunday said he was not taken to the hospital after being shot in the leg, adding that none of his family members knew his whereabouts at the time.

One of the suspects said he knew me; when Ogedengbe asked if I knew them, I said no. My reply infuriated him as he slapped me, pushed me face down to the ground, and started kicking me on the floor. After four or five days at Magbon, I was brought out of the cell to write my statement, but I refused because I didn’t know what my offence was.

Ogedengbe, who is an inspector of police, told me to stretch forward my second leg; he threatened to shoot at the leg if I didn’t write a statement. He later wrote the statement himself.”

The victim added, “I was in detention for about a month before I was taken to court. I was charged alongside six or seven people to court for conspiracy and cultism. I never knew these people. Before I was taken to court, my family searched for me. When they could not find me, they concluded that I was dead. It was when the officers took me to my house for a search that my family members knew I was still alive. We attended the court proceedings about eight times before we were discharged for lack of diligent prosecution.”

Sunday told the panel that after he was discharged by the court, Ogedengbe still threatened to send him back to prison. Ogedengbe, however, denied the allegations against him, adding that Sunday was someone that he had good a relationship with and could not have shot him.

He said, “my team was sent to Ogijo due to clashes between the residents and land grabbers. We arrested one Rafiu, who made a statement about the members of his gang and Sunday’s name came up.

It was at the police station that one officer said Sunday was a notorious cult member, who had different types of weapons. We investigated and after investigation, we charged him to court for conspiracy and cultism.

I have a good relationship with Sunday; he is a notorious criminal, who might have got his injury from elsewhere. I cannot threaten someone that gives me information; Sunday is our informant because my team members pay him for that.”