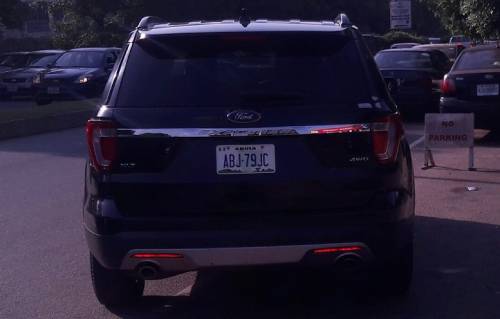 One Jeff Okoroafor has petitioned the office of the National Security Adviser (NSA) after he was allegedly
threatened with a pistol by an agent of the NSA security force.

According to Okoroafor, the incident occurred last Monday at the Chicken Republic parking lot, Wuse 2, close to AP Plaza in Abuja.

He said the unidentified NSA security agent “pulled out his pistol and threatened to shoot” because Okoroafor’s car was blocking his.

Narrating the incident, Okoroafor wrote: “As I alighted from my car, I attached on the windshield wiper a piece of paper containing my number and went on to conduct my business. By the time I returned, I saw the car in front of mine trying to wriggle its way out and I quickly rushed in, apologized to both the restaurant’s attendants and this security agent and showed them the note I left. That was it! This security agent went ballistic, calling me unprintable names, pushing me, hitting me, and threatening to slap the devil out of me.

“I saw a gun attached to his waist and then quickly asked that he conduct himself as an officer of the law, adding that reckless acts like that could lead to him losing his job. On hearing this, he rushed at me, hit me hard on the chest and pulled out his gun threatening to shoot me and vowed nothing would happen.”

Okoroafor advised the NSA to look into the “lawless act” and give due reprimand to ensure similar security agents do not bring “opprobrium to the image and integrity of Nigeria”.

The petition continued: “Till this moment, I am still riddled with shock from the offensive, barbaric, irresponsible and lawless act of this security agent. Hideous acts such as this shouldn’t be overlooked nor go unpunished. This security agent has shown that he is a lawless officer who has no respect nor regard for the constitution of the Federal Republic of Nigeria and will continue to bring opprobrium to the image and integrity of Nigeria as long as he remains in service.

“Therefore, in the light of the above, I demand the following: Immediate investigation of this issue, and appropriate sanction where necessary; issuance of unreserved apology to me for this assault and threat to my life by this security agent.