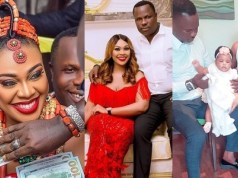 Ehi Ogbebor, the popular hotelier who went viral when Dollars rained and cars were given as gifts at her wedding less than 1 year ago, has made so many outrageous claims about her husband, Ken Bramor, including that he killed his mother for rituals and tried to use their young daughter for rituals too. 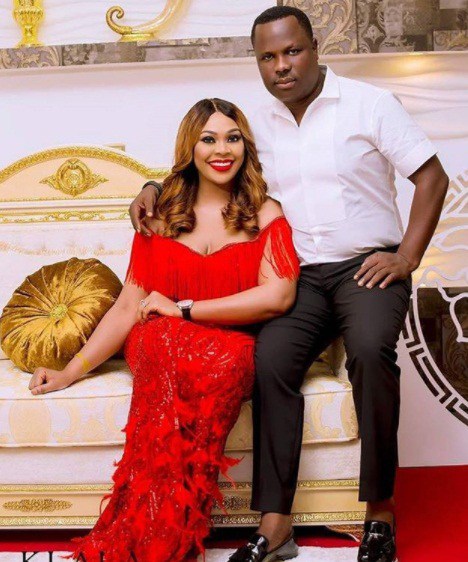 Ehi went public last month calling her husband an occult beast after it was revealed that he bought a Rolls Royce for his first wife.

At the time, she wrote:
This devil incarnate
Pretending to help the world.Yet, his immediate family lives in penury. Occultic beast.

Days after her comment went viral, the interior designer came out to apologize saying she was angry which is why she made such a post. 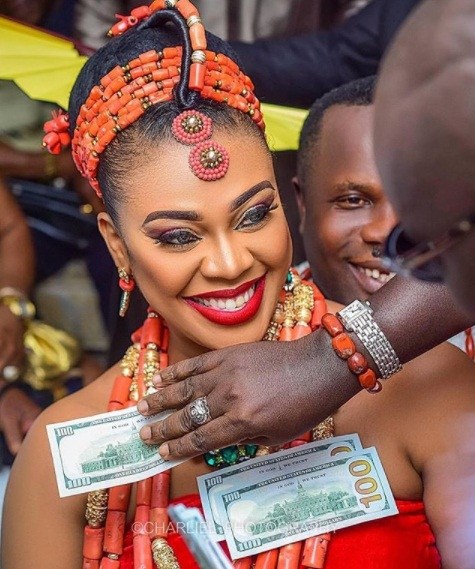 She wrote:
Been cin some funny news going around … so husband n wife can’t have small quarrel in peace….. chineke!!! ?? bloggers una noi get content or what…. Ok been serious now …. My Husband is not and will never be a CULTIST….. GOD IN HEAVEN KNOES THAT…..WHEN PPLE SAY U R MAD DOESNT MEAN THE PERSON DON PULL CLOTH……..My anger that day got the better part of me…. and am TRULY SORRY….. AM NOT PERFECT……i repeat…… AM NOT PERFECT… HE without sin shd cast the first STONE …….? Thanks so much FAM for the love towards my family …. We appreciate… God bless you guys … but from now on am totally taking my private affairs OFF THE GRAM ? … MY MISTAKE … I ADMIT …. I LOVE MY HUSBAND DEARLY..I ADORE HIM…. AND YES WE ARE VERY VERY MARRIED…. ? ….”.

But Ehi has now backtracked and is making some outrageous claims about her husband which she swears are true.

In a recent interview with SDK Blog, the CEO of Sayaveth Interiors reiterated that her husband is an occultic beast. She alleged that there are 12 of them in his cult and his deal with his cult is that he has to recycle women.

She added that her husband of less than one year is now engaged to another woman even though he has 10 kids from 6 different women.

She said he is a philanthropist to outsiders but his own immediate family live in abject poverty and she recently had to send her own money to them. She went on to allege that his late mother’s life is the sacrifice he made to become wealthy and claimed that it was after her death at a young age that he became rich.

Ehi, who was once married and divorced before she met Ken, said he even tried to use their daughter, who is currently 6 months old for rituals. She said their daughter, Ibuere, was so sick days after her birth, almost at the point of death, and her husband was responsible for it. Ken allegedly never visited the child for one day and when he found out that she survived, he was not pleased.

She went on to add that pastors warned her about her husband’s plan towards their child but she didn’t believe until she saw it for herself.

Ehi further added that Ken married her to user her destiny but since he couldn’t succeed he’s leaving her for another. She pointed out that she never wanted to marry him and only did because she found out she was pregnant and he begged her to get married. But she now regrets ever agreeing to get married to him.

Addressing her post last month where she apologized for calling him a cultist, Ehi said it wasn’t her doing, that the make up and apology was staged by him.

She took to her IG page this evening to write;

Most times the VILLAIN is seen as the VICTIM…. women constantly misjudged and victimized and scared to speak out cause of the fear of been cursed and condemned … I refuse to be that woman… Most times the truth is damn bitter but hey!!! It’s the truth…. AM A STRONG WOMAN AND WOULD REMAIN TILL MY LAST DAY…. MY KIDS AND WORK MY MAIN PRIORITY……..Nobody can break God’s own child… …. for those that judge…. enjoy all u want… your opinions don’t pay my bills… I was rescued ….. peace like a river…. say no to destiny killers… no one can force me to become EVIL … NOT EVEN FOR A BLOODY UNION….. #livingmybestlife.. won’t say a word again … done n dusted…. NARCISSISTIC BEINGS… BE CAREFUL

Thanks guys for the messages …. your girl is fine …. we cant be intimidated…. we pay our bills…. ?… GOD OVER ALL…… what doesn’t kill u makes u stronger…. emotional torture is worse than physical…. hear word before they consume u … they are empty …. n feed on ur joy……love n light ….. ?… #seed