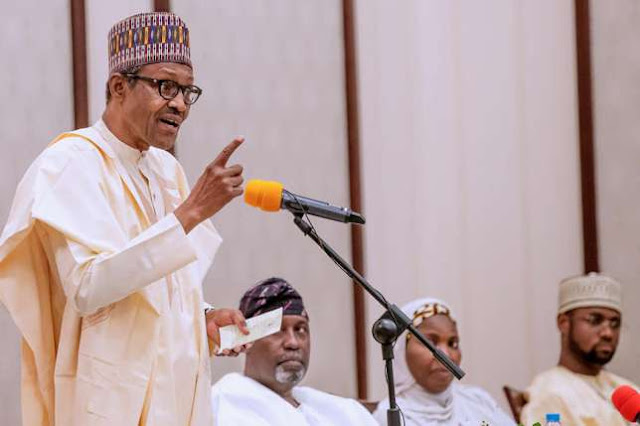 President Muhammadu Buhari has been conferred with the prestigious Polio Champion Award in recognition of
his uncommon commitment and leadership in the polio eradication programme in Nigeria.

The News Agency of Nigeria (NAN) reports that the Rotary International President, Mr Barry Rassin, who is on a four-day official visit to Nigeria, presented the award to President Buhari at State House, Abuja, on Thursday.

The Polio Champion Award was instituted by Rotary International in 1995 to recognise and appreciate Heads of Governments and organisations that have played a key role in polio eradication around the world.

Receiving the award, the Nigerian leader, while thanking Rotary International for the honour, lauded their commitment to humanitarian work across the globe.

He said: ‘‘Rotary International is well known to my generation. Your work is really humanitarian; no amount of materialism can pay you for what you have been doing and we thank you very much.

‘‘I am pleased with the efforts of Rotary International, you are champions of the weak, and I pray that God will abundantly pay you for your humanitarian services.

“I am also pleased that I have a competent Health Minister, who supervises the work.’’

Earlier in his remarks, Rassin commended the President for providing significant leadership in the efforts to eradicate polio in Nigeria.

He advocated for increased political and financial commitments at all levels for routine immunization and primary health care strengthening.

He also commended President Buhari for his commitment to Polio Eradication Initiative (PEI) by expanding the presidential task force on polio to include state governors shortly after he took office in 2015.

‘‘You are an inspiration to your country,’’ the Rotary president, who was accompanied by his wife, Esther, and other senior Rotarians in Nigeria, told the President.

According to him, Rotary has contributed 1.7 billion dollars to the global effort to eradicate polio, of which 270million dollars was expended in Nigeria.

“But even one child paralysed by polio is one child too many. We need to end polio now.’’

Rassin revealed that Nigeria had not recorded any case of polio in the last 27 months, nine months away from ‘‘possible certification of eradication.’’