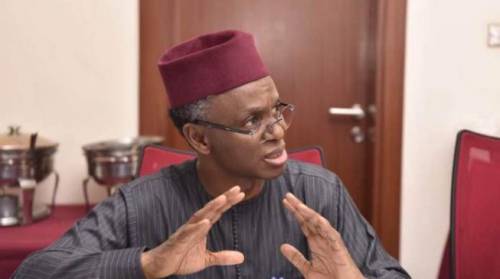 El-Rufai said that El-Zakzaky was not being held illegally as widely reported.

Recall that the Shittes leader was arrested in 2015, after a confrontation between members of the group and the Chief of Army Staff, General Tukur Buratai.

According to the Governor, the IMN leader was detained on the orders of a competent court, being a suspect standing trial for multiple murders and other related criminal offences.

Governor El-Rufai stated this yesterday in Kaduna, when he received management team of The Sun Publishing Limited.

Although there was an order by a Federal High Court in 2016 that he be released, El-Rufai revealed that the said order had no bearing on El-Zakzaky’s current case.

The governor said the state government took time to investigate the Shi’ite leader and discovered that his activities for more than 20 years had caused several killings.

He said having concluded investigation, the state took custody of El-Zakzaky from the DSS and duly charged him with multiple murders.

Explaining the alleged daily expenses of about N3.5 million on El-Zakzaky, he said the money was not on feeding of the Shi’ite leader but on everything related to his protective custody.

El-Rufai said El-Zakzaky is guarded by a detachment of soldiers and DSS operatives who live in the place he is being kept and who are maintained by the state government.

He said, “The N3.5 million monthly feeding on El-Zakzaky is not only about his food, but other expenses on security men attached to him.

“The security men are permanently stationed with him, they surrounded where he is kept.

“He is in custody because he is facing murder charge which is not bailable, among other charges.

“As a government, we decided to proscribe Islamic Movement in Nigeria (IMN) of which El-Zakzaky is the president because it is not registered with the Corporate Affairs Commission (CAC).

“So, any procession in the name of IMN is illegal, as far as Kaduna State government is concerned.”