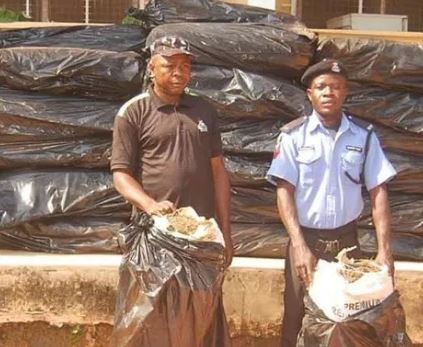 The National Drug Law Enforcement Agency has arrested two persons suspected to be drug smugglers in Etsako East LGA of Edo State. The suspects,
Matthew Onumba and Ojukwwu Henry, disguised as policemen. They were intercepted while conveying 50 bags of Indian hemp, along Okpella-Okene road.

The Edo State Commander of NDLEA, Mr. Buba Wakama, said the suspects, who are members of a drug syndicate specialized in smuggling Indian hemp from the South to North-West region of the country, concealed the hard drug in a black Toyota Hiace bus, labeled with stickers of the emblem of the Nigeria Police.

He explained that the bus had taken off from Uzebba, en route to Kaduna State, when it was intercepted during a search operation by officers of the agency. He said that the suspected smugglers had also attached a siren to the vehicle in a bid to evade security checks by the police.