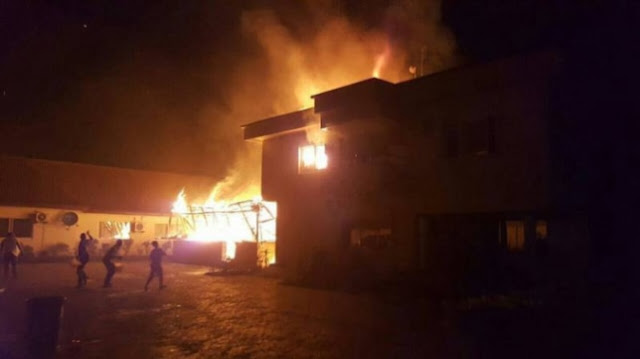 Fire has gutted about 156 shops at the timber and furniture section of Nkwo Ngwa market in Aba South Local Government Area of Abia, leaving
many families in grief for their losses.

Okechukwu Lawrence, Chairman of the market traders’ association, told newsmen at the market on Sunday that he was informed about the incident through phone call around 7:00 pm on Saturday.

Lawrence said he rushed to the scene immediately and he and the market’s taskforce members broke its gates to let in sympathisers to help quench the fire, using water from a borehole.

“We tried our best before the Fire Service came in. We used water from our borehole to quench the fire.

“But the hoodlums around later broke the borehole in their bid to steal our pump while the fire was raging.

“That was how I saw it yesterday. The fire was too much and it gulped millions of Naira worth of goods and property.

“We have some building material sellers in all these front shops. The second row of shops is occupied by furniture sellers and dealers in other things.

“We recorded a very big loss here but there was no loss of life or injury,” he said.

Lawrence debunked claims that his members attacked the fire service personnel who came to quench the fire.

The chairman said that it was a group of hoodlums called Aroo Boys who attacked the fire service men.

He said the Aroo Boys further entered the market, broke into shops, carried rice, stock fish, clothes and other property and left.

He further said the fire could have been stopped with the help of the fire fighters before it destroyed up to 100 shops.

According to him, this was hindered by the suspended Ozuomba road project of the State Government.

He appealed to the government to come to the aid of the traders by fixing the road and attending to other needs in the market.

The Abia Police Commissioner, Chris Ezeike who visited the scene Sunday morning, said he was there to access the incident and sympathise with the victims.

Ezeike noted that the section of the market was full of inflammable materials.

He however called for calm and peace, adding that the fire incident, which was said to have caused by a generating set, would be investigated immediately.

Capt. Awa Udonsi (rtd.), Senior Special Adviser to Gov. Okezie Ikpeazu on Security, said he had been notified about the incident and would involve the concerned ministries in the matter.

Udonsi said he would not take decisions for the governor but gave the assurance that government would “do the right thing” in the situation.