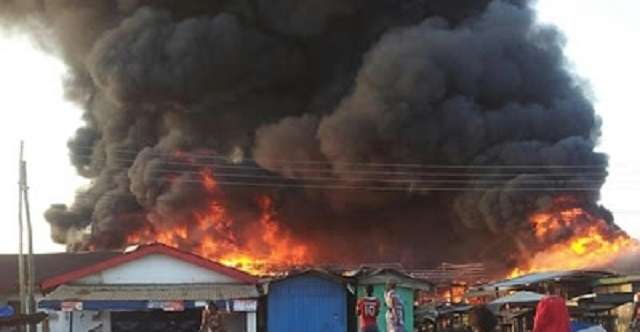 The Spokesman of the State Fire Service, Alhaji Saidu Mohammed told News Agency of Nigeria (NAN) in
Kano on Sunday that 70 of the shops were razed down completely.

The Kano State Fire Service said fire has destroyed 77 temporary shops at Kasuwar Kurmi (‘Yan Gumama) Market in Kano.
The Spokesman of the State Fire Service, Alhaji Saidu Mohammed told News Agency of Nigeria (NAN) in Kano on Sunday that 70 of the shops were razed down completely.

“we received a distress call early hours of (Sunday morning) at about 07:35 a.m from one Aliyu Ibrahim that there was fire outbreak at the market.

”On receiving the information, we quickly sent some of our personnel and fire fighting vehicle to the scene of the incident at about 07: 43 a.m to quench the fire so as not to affect other shops,“ he said.

The spokesman said that 70 of the shops were completely razed down while seven shops were saved due to the quick intervention of the firemen.

He advised traders at the market and other residents to be more careful and desist from using instruments capable of triggering fire as a way of guarding against future occurrence during this dry season.

Mohammed also advised the people to keep fire buckets, blankets and extinguishers that would enable them curtail the fire before calling on the fire service.

Mohammed said the cause of the fire is still under investigation.