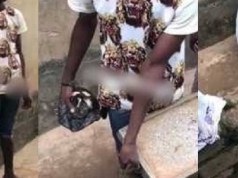 A 19-year-old boy from Ohaukwu local government area of Ebonyi State, startled workers at the Center for Psychic and Healing, a private herbal center located in Awka, when he opened a bag and brought out the genitals and fingers of a little boy he killed in Ebonyi State and brought to the center to perform rituals that would make him rich.

What surprised onlookers was the boldness with which the teenager identified as Ekwashi Sunday Onwe explained how one Blessing, now at large, took him from Ebonyi State to Awka, two days earlier, to show him where the ritual would be performed.

For her efforts, Blessing was allegedly paid N50,000, even though Sunday, who paid her the money, has no means of livelihood.

However, the bubble burst when Sunday discovered that he had been sent on a mission impossible.

He said:
I knew Blessing, even though I do not know her house. I told her my problem which was that the petty trading I was engaged in had collapsed and that I was finding life very difficult.

She then suggested to me that I could be a rich man if I killed somebody and take the private parts to a place she would direct me.

We first came to Anambra State to look for someone to kill, but we did not succeed, which made us to go back to Ebonyi. On that fateful day, I sighted the boy as he was escorting his sister to fetch water from a borehole.

It was Emeka my friend (now at large), who rushed and captured him and we carried him into the bush where I used machete to cut off his head. When I made sure that he had died, I cut off his genital organs and fingers and used a container to collect his blood.

We then threw his body and the head into the stream”.

He said further that Blessing, who brought him to Awka, said if he could bring the fresh penis and fingers of a boy, the woman would prepare a charm which would make him rich and that it was a place where his problems would be solved.