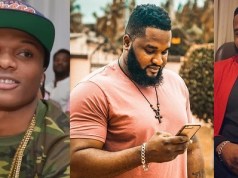 Barely few hours after his bodyguard was wounded with a matchete in Lagos, Wizkid has threatened to ‘Kill’ the said ‘staff’ who inflicted serious injuries on his guard.

Recall, the reports was that he is owing the club millions of Naira for drinks bought on credit, and so, buying such car doesn’t make sense, but Roy defended his boss, saying he will clear his debts once he returns to the country. However, when the bodyguard stepped out of the club, he was deeply macheted on the face. His attacker fled immediately, but it was later alleged that the suspect is the bouncer of club, who is currently on the run.

In a now-deleted tweet, the singer in reaction, wrote: “Run nigga. Cos we gon kill you”.