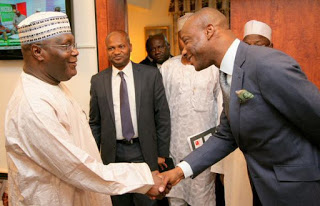 The Atiku-Agbaje Media Engagement Network (AAMEN) has urged the Presidential candidate of the Peoples Democratic Party, (PDP),
Atiku Abubakar to rescind his proposed policy on sale of NNPC if elected.

The News Agency of Nigeria (NAN) recalls that Atiku, on Sunday said he would sell 90 per cent of the Nigerian National Petroleum Corporation, (NNPC) and retain just 10 per cent of the company for the Federal Government if elected.

The former vice-president, in his policy document put together with a major delivery timeline of 2019 to 2025, also plans to sell all four national refineries.

Mr Felix Oboagwina, the Executive Director of the campaign support group, made the call in a statement issued to NAN in Lagos on Monday.

According to Oboagwina, the groundswell of opinions so far collated by the group on this matter wants Alhaji Atiku to think outside the box for solutions to the obvious ineptitude and corruption bedeviling the corporation.

“The Late President Umar Yar’Adua had won accolades for reversing the privatisation of the nation’s four refineries; this demonstrates that Nigerians wanted government’s vigorous involvement in the running of the corporation.

“We urge Atiku to direct his mind towards probing NNPC, recovering looted funds and positioning the corporation for accountability, integrity, professionalism and profitability if elected,” he said.

Oboagwina also urged Atiku to rather commit to perfecting, signing and implementing the Petroleum Industry Bill (PIB) within six months of coming into power.

“AAMEN would want Atiku to re-open scandalous NNPC cases like the $25 billion scam alarm raised by the Minister of State for Petroleum, Dr. Ibe Kachikwu.

“It is not always that a drastic solution should be visited on a drastic problem and for anyone to say that selling off the country’s shares in NNPC would be the only solution to the rot in the system simply means that corruption would have won,” he said.

While acknowledging that the rot in NNPC, over the years, stank to the high heavens, Oboagwina pointed out that selling off the country’s shares in the organisation would reduce the Federal Government to an ordinary rent taker.

He said that proposing to embrace disinvestment would also fuel speculations that the PDP candidate was on a mission to feather the nest of his rich associates at the detriment of the poor masses.

“We being a mono-economy with robust reliance on oil as the major revenue source, selling off NNPC will amount to killing the Golden Goose that lays the golden egg for our country,” he said.

He noted that over the years, NNPC administrators had operated for their own selfish benefits and those of their nominators, saying that the primary objective should be the appointment of credible executives to run the corporation.

The AAMEN executive director said there was need to borrow a leaf from oil-producing countries like the Argentina, as well as the United Arab Emirates, whose substantial control of their oil facilitated their
infrastructural development especially in Dubai.

“NNPC is the commonwealth of Nigeria’s 180 million population and they should derive maximum benefits from the corporation,” he said.

He however, stressed the need for contestants to the nation’s highest office to present to Nigerians, their blueprints for divesting the economy and creating more revenue sources to cater for the country’s soaring population.