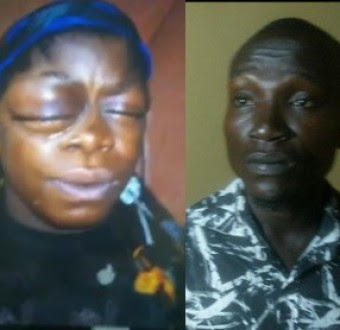 Father of three, Mr Elijah Okorafor from Aruchukwu in Abia State (right) has been accused of battering his househelp following her refusal to continue having sex with him in their home located on Genesis Street in Nkpor Area of Rumuorlumeni Port Harcourt.

Security consultant/activist,  Bosinde Araikpe, who shared the story online, called on humanrights activists to come forward to ensure that the accused is tried and brought to book. Read what he wrote below

This world is wicked, look at what this married man did to his house help because of sex.
The who identified himself as Mr Elijah Okorafor from Aruchukwu in Abia State a resident of Genesis Street in Nkpor Area of Rumuorlumeni Port Harcourt confessed to have been abusing his teenage house help including forcefully having sexual intercourse with her until he almost killed her for refusing to continue having sex with him last April & sent her away.

He has been arrested by the Rumuorlumeni Police Division led by the DPO SP Usman A. Sadiq under the command of CP Zaki M. Ahmed.
This man must be tried in court, everyone let’s keep our eyes on this case my name is Amb. Bosinde host of SECURITY BRIDGE with BOSINDE Live