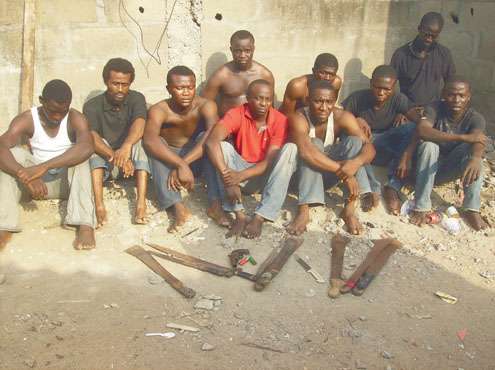 Eight men who allegedly terrorised members of the public, were on Monday brought before an
Ogudu Magistrates’ Court in Lagos by the Police.

The men were alleged to have deployed dangerous weapons in a manner to cause breach of peace in the Oke-Iranle area of Ajah, in Lagos.

They are facing a three-count charge of conspiracy, membership of an unlawful society and unlawful display of arms in the public.

The accused, however, pleaded not guilty to the charges and were granted bail in the sum of N50, 000 each by the Magistrate, Mrs E. Kubeinje.

The magistrate in her ruling ordered the accused to produce two sureties each in like sum.

In addition, the sureties should show evidence of tax payments, to the Lagos State Government.

Earlier, Police Prosecutor, Insp. Lucky Ihiehie, told the court that the accused committed the offences on Nov. 8 at Oke-Iranle area of Ajah, in Lagos, at about 11:00 p.m.

He said that the eight accused, conspired with themselves as members of Eiye Confraternity and engaged themselves in a fight with another group of unknown boys with dangerous weapons.

“Some members of the public also sustained serious injuries while some properties were destroyed.

“They were arrested by a team of police men, led by the Divisional Police Officer (DPO), Langbasa Division, Ajah and transferred to the Anti- Cultism Unit, State CID, Yaba on Nov. 9’’ Ihiehie said.

The case was adjourned until Dec. 18 for mention.