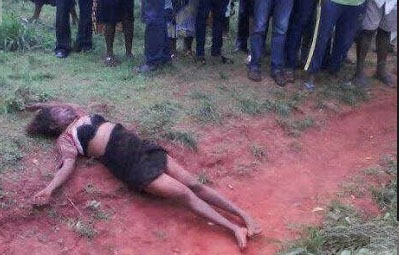 A young lady has passed away after taking drugs to abort an ‘unwanted’ pregnancy in Delta state. According to reports, the lady who lives
in Sapele area of the state – got pregnant for a man who married another woman last week in Bayelsa after dumping her.

Due to the heartbreak, the lady decided to abort the pregnancy and took some drugs including local herbs before she started feeling sharp pains in her stomach. She began bleeding profusely as her people rushed her to the hospital where she died at the gate.

According to journalist Sapele Oghenek who shared the story, the lady had earlier gotten pregnant for the same man twice and has two children for him. The first time, the man abandoned her in the hospital as the lady’s father took up the responsibility and paid for the bills.

Despite being warned by her family not to date the man again, she still got pregnant and gave birth to his baby the second time.

The girl died while trying to remove the third pregnancy after the same man married another woman.