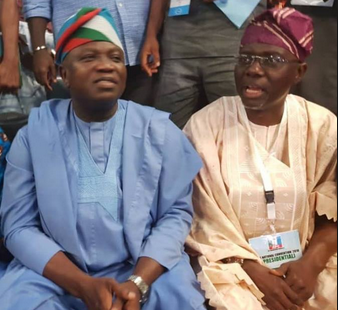 The governorship candidate of the All Progressives Congress in Lagos State, Babajide Sanwo-Olu, has denied claims that there is
rancour between himself and the incumbent governor of Lagos state, Akinwunmi Ambode.

Recall that in the buildup to the APC primaries in the state, Ambode held a press conference where he washed Sanwo-Olu. Many had believed that Ambode’s comment would have created a rift between them. Ambode also lost his re-election bid after Sanwo-Olu won the party’s governorship ticket.

Sanwo-Olu in a series of tweets today denied that there is a rift between himself and Ambode who he hopes to take over office from come May 29th 2019.

ALSO READ: Obasanjo advises Nigerians not to hand over Nigeria to hooligans and thieves

“On the ‘Ambode issue,’ let me state it here that there is no ‘Ambode issue.’ He is my governor. We are one party and our goals are the same. A better and greater Lagos is our challenge. There is no rancour. We meet. We talk. We are clear about what Lagos needs to excel and that is our collective goal,” Sanwo-Olu tweeted