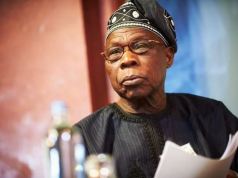 Former President Olusegun Obasanjo has advised Nigerians not to hand over the nation and democracy to people he described as ‘thieves and hooligans’.

The former president said this when he spoke at the launch of Goodluck Jonathan’s book in Abuja, on Tuesday November 20th.

Speaking at the event, Obasanjo said;
There is still no substitute for democracy when all is said and done. It fosters peace. It builds and does not destroy. It unifies, rather than divides.

The former president has since asked Nigerians to vote out the Buhari-led administration in 2019 and has openly declared his support for Atiku Abubakar, who is running as the PDP presidential candidate in next year’s election.