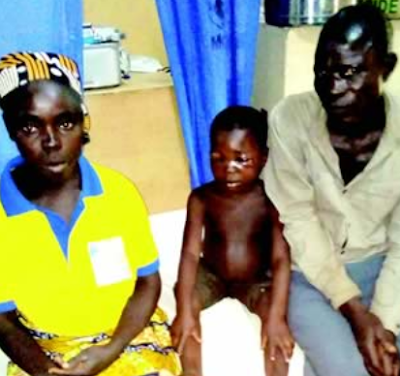 A seven-year-old boy named Monday Ajeh, is currently writhing in pain in a hospital in Nasarawa state after
suspected cultisits abducted him and plucked out his eyeballs in Agaza village in Keana Local Government Area of the state.

According to reports, the suspected cultists stormed the village in the night and abducted the little boy last Thursday, November 15th. His father, 47 year old Agadi Ajeh, said himself and his family members were sleeping when they heard the little boy screaming for help as he was been whisked away. They all stormed out and began searching for him. Hours later, they found him two kilometers away from their home, in the pool of his own blood with his eyes plucked out.

The spokesperson of the state Police Command, ASP Samaila Usman, confirmed the incident and said the victim had previously informed his parents that some persons had threatened to pluck out his eyes but that they dismissed the threat and did not report the matter to the police.

Usman said the police is currently on the trail of the suspected cultists.