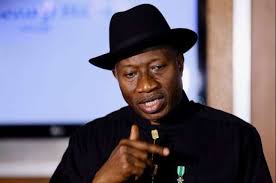 The Governor of Borno state, Kashim Shettima has described former President Goodluck Jonathan’s new book as a
‘presidential tale by mid-day’.
Shettima said this in a statement issued to newsmen by his media aide, Isa Gusau on Wednesday, November 21, 2018.

Jonathan, on Tuesday, November 20, 2018, launched his book titled, My Transition Hours in Abuja.

In the book, the former President reportedly said that the Chibok girls kidnapping was used against him in 2015.

In April 2014, over 200 female students were abducted from the Government Secondary School in Chibok, Borno State by Boko Haram.

Chapter four
Speaking on the former President’s narration of the Chibok girls’ issue which he said is contained in the fourth chapter of his book, Shettima accused Jonathan of refusing to make public, the findings of the committee set up to investigate the abduction of the girls in June 2014.

The Governor said “The former President’s elementary book of tales fell short of the courage required of him to publish findings by his own panel in chapter four of his book.

“The whole of Tuesday night, I took the pains of reading His Excellency, former President Goodluck Jonathan’s book, My transition hours, from the first to the 177th page. I took particular interest in chapter four (the Chibok school girls affair) which has 42 paragraphs written on pages 27 to 36.

“I was amused that despite ‎admitting in paragraph 15, that he had (in May 2014) constituted a Presidential Fact-Finding Committee under Brigadier General Ibrahim Sabo and many others “to investigate” the Chibok abduction, former President Jonathan refused to mention any part or whole of the findings by that panel which had submitted a highly investigative report submitted to him on Friday, June 20, 2014 after the panel held investigative meetings with the then Chiefs of Defense Staff, Army Staff, Air Staff, the DG, DSS and IGP, met all security heads in Borno, visited Chibok, met with parents of abducted schoolgirls, met surviving students, interrogated officials of the school and the supervising ministry of education, interrogated officials of WAEC and analyzed all correspondences.

“President Jonathan has refused to make public the findings submitted to him. I was expecting the findings in his book but he has deliberately swept that report under the carpet.

“What has become very clear is that the former President decided to sit on facts in his custody while he published, in an elementary standard, a book of fiction designed to pass guilty verdicts to anyone but himself, with respect to the open failures of his administration to rescue our daughters and in tackling the Boko Haram challenges.

The governor stated that by refusing to publish any part of his own panel’s findings on the Chibok abduction, Jonathan’s book was nothing short of a presidential tale by mid-day”

Ex-minister accuses Jonathan
Also, a former minister who served under Jonathan disagreed with his version of what happened when he called to concede defeat to Buhari.

The former minister alleged that the former President had plans in place to obtain a court order to stop the Independent National Electoral Commission (INEC) from announcing the result of the 2015 presidential election.

“The impression the former president is trying to create is that the people came to tell him not to concede. In truth, Jonathan was being persuaded by a former south-south governor not to concede, so some ministers were quickly invited to come and counter them.

“What would Okonjo-Iweala, Adoke and Chidoka be doing at the villa at that time if not that something was going wrong? Is Jonathan trying to say he was not involved in Elder Godsday Orubebe’s attempt to disrupt the announcement of the results? Is Jonathan trying to claim innocence of a plot to secure a court injunction to stop INEC from further announcing the results? Jonathan needs to be a man of honour,” he added.

Former President Goodluck Jonathan lost to Muhammadu Buhari of the All Progressives Congress (APC) in the 2015 presidential election.