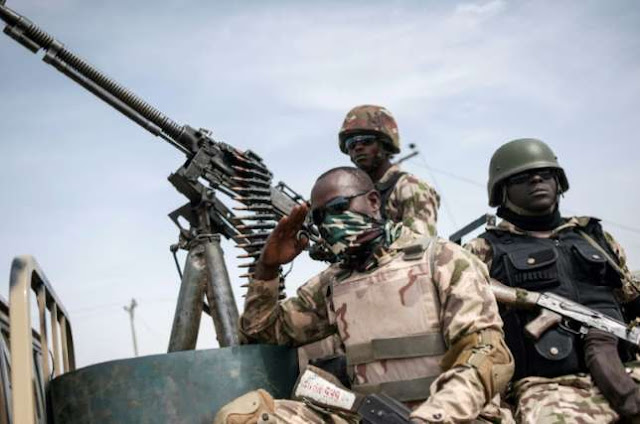 A report by a United States-based think tank, the Center for Strategic and International Studies (CSIS), estimates that
as many as 6,900 terrorists may be operating within Nigeria’s borders.

According to the CSIS Transnational Threats Project report, titled “The Evolution of the Salafi-Jihadist Threat: Current and Future Challenges from the Islamic State, Al-Qaeda, and Other Groups”, the terrorists are spread across three groups, Boko Haram, Islamic State West Africa Province (ISWAP), and Ansaru.

The report constructed a data set of terrorist groups and fighters from 1980 to 2018 and estimated Nigeria’s number of terrorist fighters to be between 3,450 and 6,900.

President Muhammadu Buhari declared in 2015 that Boko Haram had been technically defeated, but the CSIS report noted that Nigeria still belongs in the group of countries experiencing significant violence due to terrorist activities, most notably from Boko Haram and ISWAP.

Boko Haram’s insurgency escalated in 2009 after a crackdown by security operatives led to the death of hundreds and the extra-judicial killing of its spiritual leader, Mohammed Yusuf.

Under the leadership of Abubakar Shekau, the group has killed tens of thousands of Nigerians as well as displaced millions who are scattered in internally displaced person’s camps.

The group pledged allegiance to the Islamic State (IS) in 2015, after which Shekau’s brutal leadership style was questioned and internal strife led to a factional group, ISWAP, breaking away to be led by Yusuf’s son, Abu Musab al-Barnawi.

The report read, “In 2016, Islamic State leaders in Syria and Iraq endorsed a schism within the organization, siding against Shekau and in favor of al-Barnawi.

“In August 2016, an Islamic State newsletter published an interview with al-Barnawi that broke with Shekau and discouraged violence against Muslim civilians.

“Implicitly criticizing Shekau and his support for needless violence, al-Barnawi remarked that ‘the (Islamic) State has forbidden targeting the mass of people who belong to Islam, and it is innocent of that action.

“Al-Barnawi then explained that the group would focus on targeting Christians and the Nigerian state.”

Roughly three quarters of ISWAP’s over 400 terrorist attacks in 2015 took place in Nigeria, according to the report.

Ansaru also started as a Boko Haram faction and became officially independent in 2012. The group is more ideologically-aligned to Al-Qaeda and known for kidnapping and killing foreigners.

Ansaru has been largely dormant since 2015 and its leader, Khalid Barnawi, was arrested by security operatives in 2016. He’s been charged with the kidnapping and killing of 10 foreigners.

The CSIS report also disclosed that Boko Haram had used drones for intelligence, surveillance, and reconnaissance in Nigeria and Cameroon in 2017.

The report noted that most countries, including Nigeria, who are most impacted by terrorist activities are at or near the bottom 10% of countries worldwide in terms of government effectiveness.

“Most are also in the bottom 10% of countries worldwide in other governance indicators, such as control of corruption,” the report read.

The report concluded that poor governance indicators make it difficult to be confident that terrorism and insurgency will end in the foreseeable future.

The CSIS report comes just days after the Nigerian Army raised alarm over the emergence of a new terrorist group, identified as Jama’Atu Nus’Ratul-Islami Wal-Muslimina, in the northeast region.

Not much is known about the new group yet, but the Army said it’s led by a certain Abul- Fadl Iyad Gali.