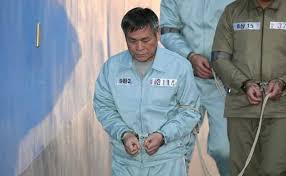 A South Korean Pastor was sentenced to 15 years in prison on Thursday for raping eight followers over
40 different occasions at his mega-church in Seoul, Yonhap news agency reported.

Lee Jae Rock of the Manmin Central Church, which has about 130,000 followers, was convinced by the Seoul Central District Court of using his authority to commit the rapes, the agency reported.

The 75-year-old regularly took advantage of his followers’ trust in him as a man close to God Yonhap quoted the court as saying.

The church, which was founded by Lee in 1982 and claims to have more than 10,000 branches around the world, was expelled by the Christian Council of Korea in 1999 under the accusation of “heresy.’’

On its website, the church claims that “countless have received God’s healing of such incurable and terminal diseases as AIDS, cancer, and the like on the spot when Rev Dr Lee prayed not by placing his hand on each of the sick but merely from the pulpit.’’